Arctic 2015: Arctic warming twice as much as elsewhere 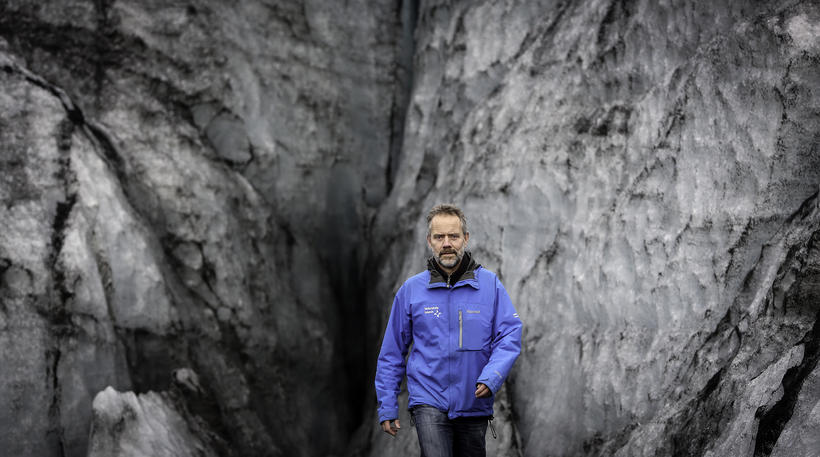 If Vatnajökull were melting at the same speed as the Greenland ice sheet, it would be gone in ten years – and global warming in the Arctic region has reached incredible levels, says Tómas Jóhannesson, glaciological research group leader at the Icelandic Met Office.

Global warming is a cause for concern for many. The European Union, for instance, has set a target to limit global warming to 2°C this century, as compared to pre-Industrial Revolution temperatures. According to Tómas Jóhannesson, glaciological research group leader at the Icelandic Met Office, many scientists believe this target is unrealistic. Since 1980, temperatures in the northern hemisphere have risen by just under 1°C – and by much more in the Arctic region. Temperatures in Svalbard, Norway, have risen by 3-4°C, in Greenland by over 2°C, and in Iceland by just over 1.5°C. “These unbelievable increases are major news, particularly in Svalbard and Greenland,“ says Jóhannesson.

The quickest temperature rises have occurred in Greenland, Alaska, Northern Canada and Siberia. Significant warming did not begin in Greenland until the mid-1990s, i.e. temperatures have risen by over 2°C in just twenty years. “This is a much quicker rise than anybody expected, even in the Arctic region,“ explains Jóhannesson. “The explanation is probably that a localised, natural change – which was due on the back of low rises in temperature in previous years – coincided with general global warming. Most people expect that, before long, the pace of warming in this region will slow down and approach long-term averages. When the current period of natural warming ends – and nobody expects it to last forever – a period of slower warming will commence.“

That said, Jóhannesson adds that temperatures in the Arctic region could rise at double the rate of the rest of the world over the next 100 years. “There is general agreement that this means a wildly different climate for the Arctic region – including Iceland – bringing completely different conditions for animal and plant life.“

Global temperatures have always fluctuated. For instance, temperatures in the Arctic region are thought to have been much higher 6-8,000 years ago. “There are several other examples of warm times,“ Jóhannesson points out. “Temperatures in Iceland – and in most of the Arctic region – back in 1930-40 were about as high as they are now. The difference is that climate warming is occurring for different reasons now than in the past, i.e. by human influence. By this I mean emissions of greenhouse gases – if nothing is done about this trend, the world will continue to heat up more quickly than ever before.“

According to Jóhannesson, it is difficult to forecast global warming for the next century, as it is not yet clear what the international community will agree upon in their efforts to reduce greenhouse-gas emissions. Some predictions assume similar or higher emission levels than now, others lower. Population growth is also a factor, and forecasts from the United Nations are used in this context. Jóhannesson indicates that temperatures in Iceland could rise by 2-3°C by the end of the century if little is done to control emissions, or by 1-2°C if radical action is taken. “These forecasts have not changed significantly in over twenty years,“ he says.

Glaciers are an accurate ‘thermometer’

Glaciers act as an accurate ‘thermometer’ and global warming obviously affects them. The years 2009-14 saw twice as much ice melt in Greenland as in 2003-09, and three times as much in Antarctica. “Around the year 2000, glacial input into the world’s oceans was highest from ‘small glaciers’, such as Iceland’s Vatnajökull and glaciers in Alaska, Patagonia and elsewhere,“ explains Jóhannesson. “Nowadays, the Greenland ice sheet pours more into the sea than all of these smaller glaciers put together. The small glaciers added 0.5-1 mm per year to the world’s seas, although there is a good deal of uncertainty about this figure. The Greenland ice sheet has now reached a figure of 1 mm per year, up from 0.5 mm per year just a few years ago.“

According to Jóhannesson, scientists expect this trend to continue as long as the Arctic region continues to warm up.

He indicates that changes appear to be quickest where glaciers break off into the sea, as both sea temperature and pack ice in front of glacier ice tongues determine to a significant extent the rate of glacier melting. Reductions in pack ice also affect temperatures. Where before expanses of pack ice reflected sunlight away, open seas reflect less sunlight back into space and heat up.

What impact could this fast-melting ice have on Iceland? Jóhannesson’s first answer is glacial run-off. He also mentions possible changes in water course, e.g. water that previously flowed to a waterfall outside of the glacier could begin to flow elsewhere. Changes could also occur in courses of water on the outskirts of glaciers. The best example of this in Iceland is the Skeiðará river, which changed course in 2009 and merged with Gígjukvísl river. Lakes could form with run-off in different places to where glacier rivers traditionally flow from.

Furthermore, increased glacial melting could bring changes to glacier-edge lagoons and, in turn, to glacier river floods. Some lagoons may stop flooding while new ones begin. Floods could also become weaker as their flow out into lagoons, meaning all sorts of changes to water flows. If lagoons form on the edges of glaciers, sediment will settle, altering the deposits and colour of rivers. Other factors, such as fish migrations, may also be affected.

On top of all this, land rises when glacial pressure decreases. This can alter the coastline and have an effect on sea erosion. Jóhannesson gives the example of the harbour in Höfn, South Iceland, which is quickly getting shallower as the Vatnajökull glacier recedes. Land is expected to rise by more than one metre this century, which will make entering the harbour considerably problematic. “This is a big issue for the community,“ warns Jóhannesson, adding that in most places in Iceland sea levels are actually rising, since world sea levels are rising and the land is not being altered by changes in glacial pressure. Sea is encroaching on land rather than the other way round.

On the subject of the Greenland ice sheet, Jóhannesson explains that the glacier is shrinking and is therefore exerting less of a gravitational pull on the sea towards Greenland than before. “It is reasonable to expect the sea to retreat to some extent from Greenland, meaning sea levels will in many places drop or at least not rise as much as they otherwise would,“ he says. “This is not, however, a particular problem since in Greenland the land descends steeply into the sea. These changes will therefore not cause problems for harbours. Sea-levels around Iceland will also rise less than the world average for the same reason.“

According to Jóhannesson, extensive research has been carried out into the effect of climate change on glaciers in Iceland. One study predicts that Langjökull, Hofsjökull and the southern part of Vatnajökull will all have disappeared in 200 years’ time. “Both the former Icelandic Nautical Agency and the current Icelandic Road and Coastal Administration are already taking such factors into account when designing ports and infrastructure,“ he explains. “Similarly, the National Power Company of Iceland bases the design and management of its hydropower plants on considerations of changes in glacial run-off. For instance, in recent times it has been possible to generate more energy from the Kárahnjúkar Power Station than it was originally designed for, i.e. the new operational situation has increased hydropower revenue. Shrinking glaciers also have an effect on the appearance of the land, tourism, and many other factors. These changes will require a lot of planning.“