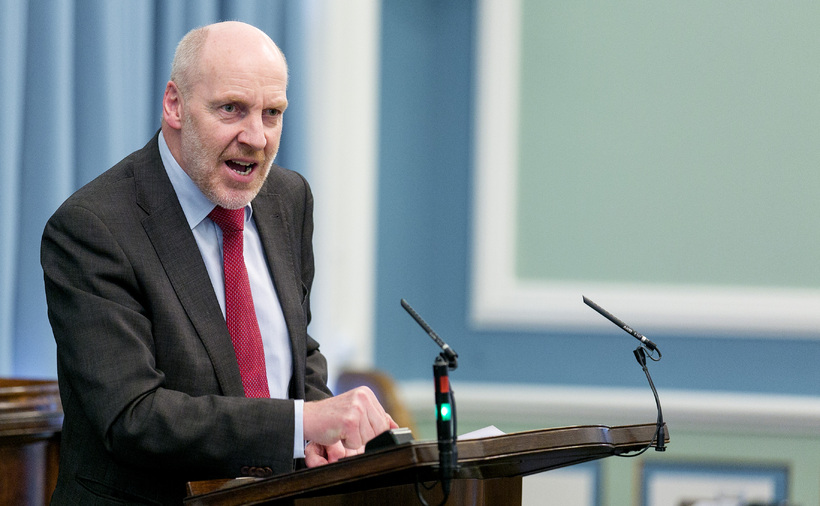 Steingrímur J. Sigfússon of the Left Green Party made a heated speech about the proposed nature pass today at Parliament. mbl.is/Ómar Óskarsson

"Is no-one going to stand up and stop this nonsense?," asked Steingrímur J.Sigfússon, parliamentarian for the Left Green Party on the subject of the Minister of Tourism's proposal for a nature pass. He was referring to RÚV new which revealed that Icelanders would have to show a purchased nature pass to be able to visit Þingvellir national park.

The proposed nature pass is for all those travelling in Iceland, Icelanders and international visitors and the income from the pass goes towards upkeep and nature protection.

Sigfússon pointed out that RÚV national news obviously had detailed information about Ragnheiður Elín Árnadóttir, Minister of Tourism's proposal. "It seems that from next autumn onwards Icelanders will have to show a nature pass at Þingvellir and will be fined by park rangers if caught without one."

He added that even though Þingvellir is at risk from tourist traffic, the nature pass, which costs 1500 ISK (USD 12, EUR 10) for three years, will breach the public right to travel around Iceland freely. Sigfússon believes that a tax on each Icelander toward the upkeep of the country's national parks would be a better idea.

The Icelandic Travel Industry Association (SAF) has opposed the bill and proposes a tax on accommodation nights instead for international visitors, which is also debated.

The Left Green Party has strongly opposed the nature pass, with Left Green leader Katrín Jakobsdóttir saying that it limits the freedom of Icelanders to travel in their own country.