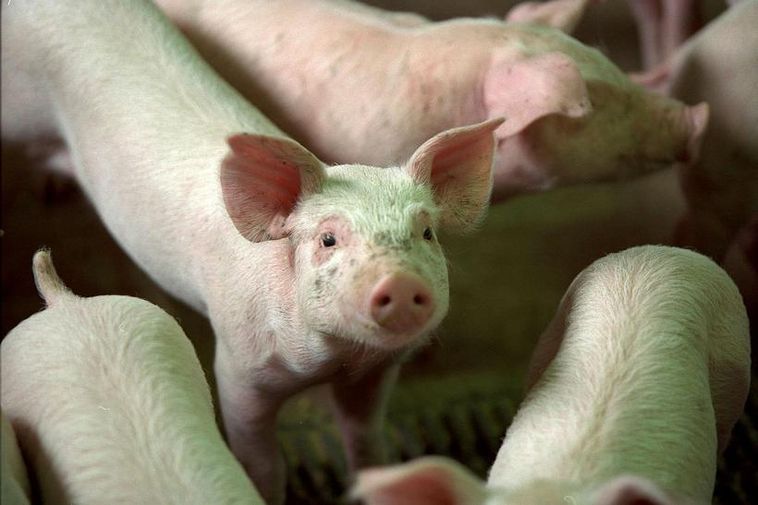 It is unclear whether the pigs in the picture are society pigs or pigs of happiness. mbl.is/Árni Sæberg
Vala Hafstað
vala@mbl.is

Pigs are the latest weapon residents of Borgarfjörður eystri, the East Fjords, Iceland, have chosen to use in their fight against climate change. Their plan is to build an army of pigs, ready to eat organic waste, which otherwise would rot and produce methane, a greenhouse gas. The pigs may even be asked to launch an attack on cow parsley, also called wild chervil, (Anthriscus sylvestris) – a plant that spreads aggressively and tends to choke out more desirable vegetation.

“We have never found it desirable to drive our organic waste a minimum of 70 km [43 mi], so it has been placed in landfills,” Helgi Hlynur Ásgrímsson tells RÚV. He is on the environmental board of Borgafjarðarhreppur district, population about 100.

“Of course, that’s not the way it should be. Then this idea came up to have pigs eat our organic waste. That’s just the way it is; the more you think about it, the more brilliant it is.”

There used to be pigs in Borgarfjörður eystri, which were fed food scraps from restaurants. This time, an association has been founded to bring what residents call society pigs to the area. They are expected to arrive this fall. They will be fed organic waste from homes, and they will be able to run around, which qualifies them as pigs of happiness.

Regulations prohibit the sale of meat from pigs on such a diet, Helgi reports. “Therefore, most pigs in Iceland are given imported feed. I foresee having to change that rubbish,” Helgi ponders, referring to current regulations.

One way or other, the meat will likely be consumed. “I always saw before me the last picture of the Asterix [French comic] books, where all the residents sit together at a party,” Helgi states. Although people commonly say negative things about meat consumption nowadays, Helgi states it isn’t always negative. In Borgarfjörður eystri, waste that otherwise would leave a large carbon footprint will be converted into meat, he concludes.