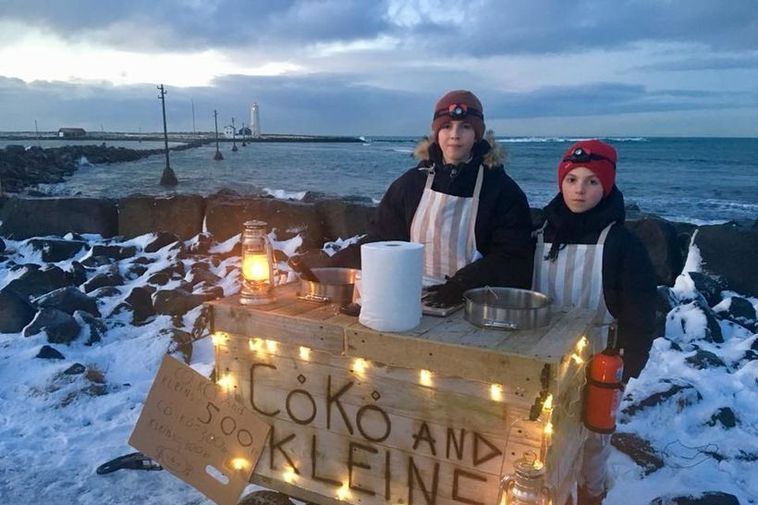 The boys made the food wagon themselves and deep fried kleinur on the spot for hungry tourists. Photo/Ragnheiður Valgarðsdóttir

These young entrepreneurs decided to try to make a profit from the tourist boom and set up a kleina and hot chocolate booth at Grótta beach in West Reykjavik.

A photo of the boys was posted up on Facebook and received a great reception. "I bumped into these great boys out at Grótta earlier. I bought hot chocolate and a warm kleina which they fried on the spot. They made the food wagon themselves. They won cute award of the day both with me and the tourists that were out there that day," wrote Ragnheiður Valgarðsdóttir.

The boys had written "Cocoa and kleins" on the food wagon.

Speaking to mbl.is, Valgarðsdóttir explains that she was visiting Grótta with a couple of tourists at around 5 pm when they saw the  boys. "They were setting up the food wagon and turning on the lights."

"They made the wagon themselves with some help from their dad and had a gas cylinder and a fire blanket on the side. They heated the oil and fried the kleinas."

To our readers who don't know what a kleina is, it's one of the most typical and old-fashioned Icelandic pastry that there is. It resembles a doughnut in taste but is made in a twisted shape.

"The boys were really polite and really fun. They were really proud of their effort and were good at talking with the tourists."