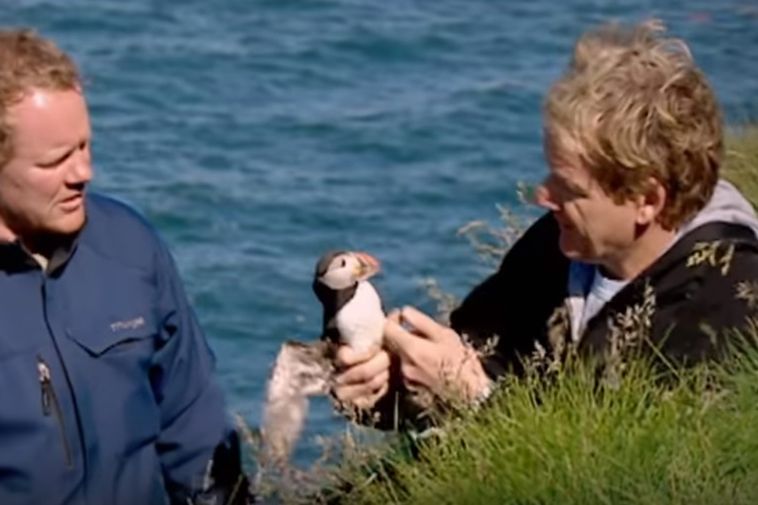 The bird managed to bite Ramsay's nose before flying off. Photo: Screenshot

Celebrity chef Gordon Ramsay visited Iceland during puffin hunting season and tried his hunting skills on this most famous bird species in Iceland.

Puffin stick to cliffs. To catch them the hunter must sit at the edge of one, dozens of metres high, waving a net on the end of a pole almost like you might do with fish. Only in this case, you aim up to catch them while they fly over your head.

A puffin got a bite of Ramsay's nose

A tradition dictates, the first puffin caught must be released. And just before it flew off, it managed to bite Ramsay in the nose. The hunt wasn’t successful at first while Ramsay was learning the ropes, but he managed to catch three in the end, took two back to cook and released one.

Puffin is a traditional dish in the Westman Islands, and in other places in Iceland where the bird is common. Puffin eats fish and lives by the sea, which lends the dark meat a distinct flavour unlike most other birds commonly eaten.

Raw puffin heart for the hunters

Ramsay skinned the birds with the help of his local guide and hunting mentor, who took the heart from one of the birds and ate it raw. Than dared Ramsay to do the same, which he did.

Ramsay then prepared a dish using a borrowed piece of rye bread (seeing as the one he was cooking in the lava field his was stolen) along with grilled tomatoes, skyr, cucumber and mint salad, and finally, with the puffin, which he barbecued after marinating it with juniper berries, brennivín schnaps and olive oil.