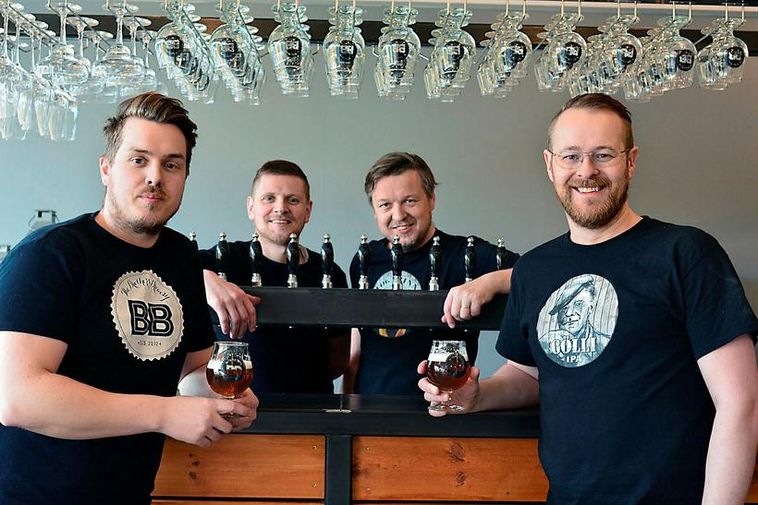 The owners and staff at Brothers Brewery. Photo/Ólafur Einar Lárusson

Brothers Brewery, a microbrewery located in the Westman Islands, is opening an ale house in town. “Now we can receive groups that want to get to known the production, and sell great beers to locals,” says Kjartan Vídó Ólafsson, one of the owners.

“We’ll have six different types of beer on tap at the ale house,” says Ólafsson, who plans to rotate the brew on tap regularly. Aside to the local brew, the ale house will serve beer from other breweries, around 30 different types in total. “Around 70% of the beer we'll serve isn’t available here in town, so we’ll bring new brands and brews to the market.”

Brothers Brewery’s ale house is located in a house called Baldurshagi, in the centre of town in the Westman Islands.

Wheels started turning after Beer of the Year award

Kjartan and his brother Jóhann Ólafur Guðmundsson started brewing in 2012. They got their brothers Hlyn Vídó and Davíð to join them and the name Brothers Brewery came to be. “The name refers to us brothers, though Davíð quit and Hannes Kristinn Eiríksson, Jóhann’s brother-in-law, joined us instead. This is a family-run company.”

In the beginning the main idea was to brew beer and sell it at Restaurant Einsi Kaldi in the Westman Islands. “The wheels started turning after we received an award for Beer of the Year at Iceland’s Beer Festival at Hólar last June. Since then we’ve been selling our beer in four to six restaurants in Reykjavik.”

Brothers Brewery has recently been expanding. Tools for brewing more at once have been bought and equipment to bottle the beer. Bottled beer means that beer from Brothers Brewery might likely soon be found in Vínbúð, the state run liquor store. More brew also means it will be available in more places as more restaurants will soon have the option to buy the beer.