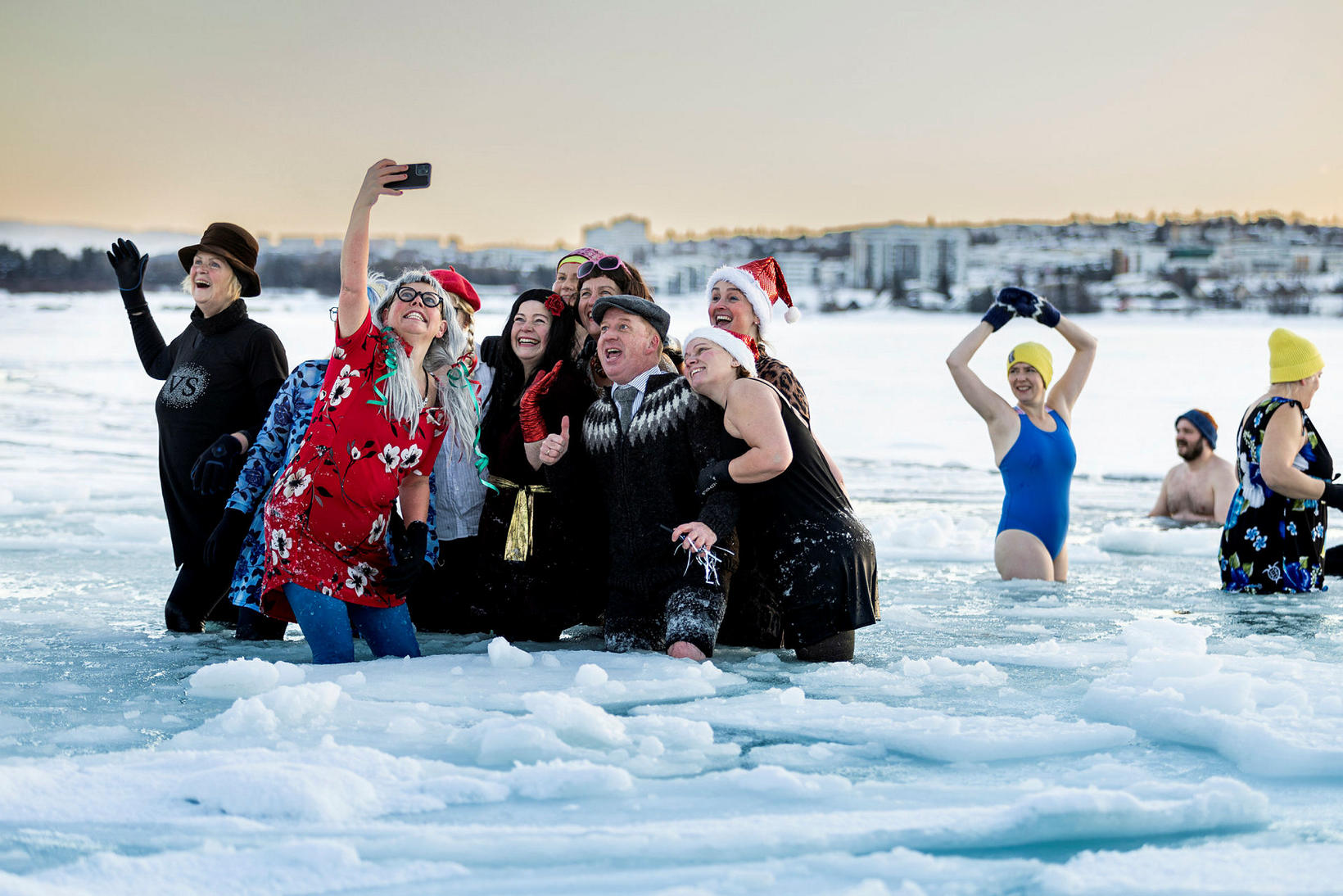 What a time for a selfie in the icy sea on New Years Day with your fellow swimmers. mbl.is/Arnþór

A New Year’s Eve swim was held in Nauthólsvík yesterday, where more than a hundred people participated.

“We haven’t been able to go to the sea together on New Year’s Day since 2020, so it was extremely joyful,” says Herdís Anna Þorvaldsdóttir, chairperson of SJÓR, the Reykjavík Sea Swimming Association. 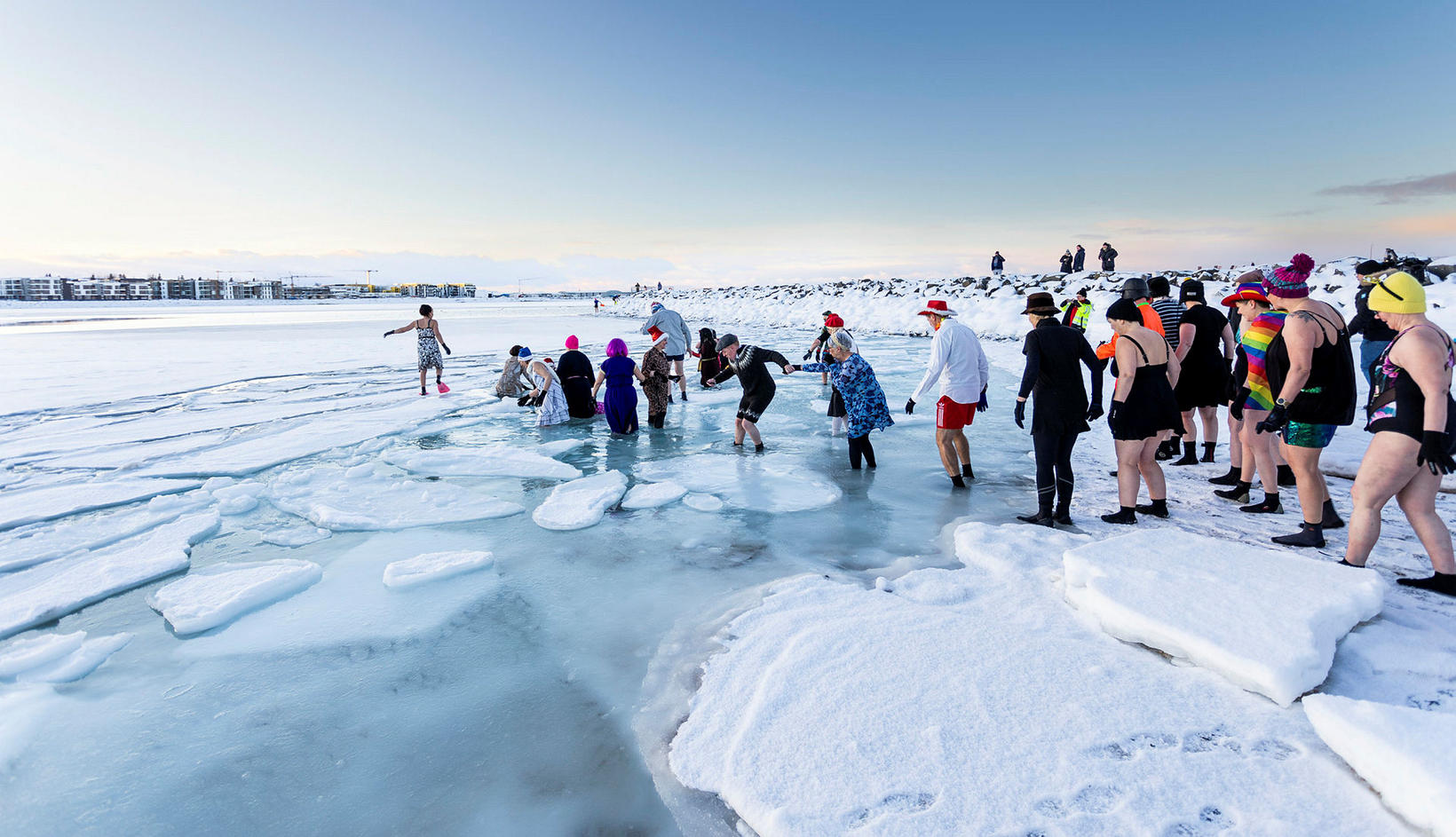 The New Year's Day swim is different than most other swims of the year because people show up in fancy attire to celebrate the new year. mbl.is/Arnþór

Þorvaldsdóttir says that this year’s conditions were a bit unusual.

"The record cold weather -2.2 was hit in 2018 and has been leveled several times this year, including today, and then the thickness of the ice over the water was unusual. It was really beautiful this year because the ice made it so different." 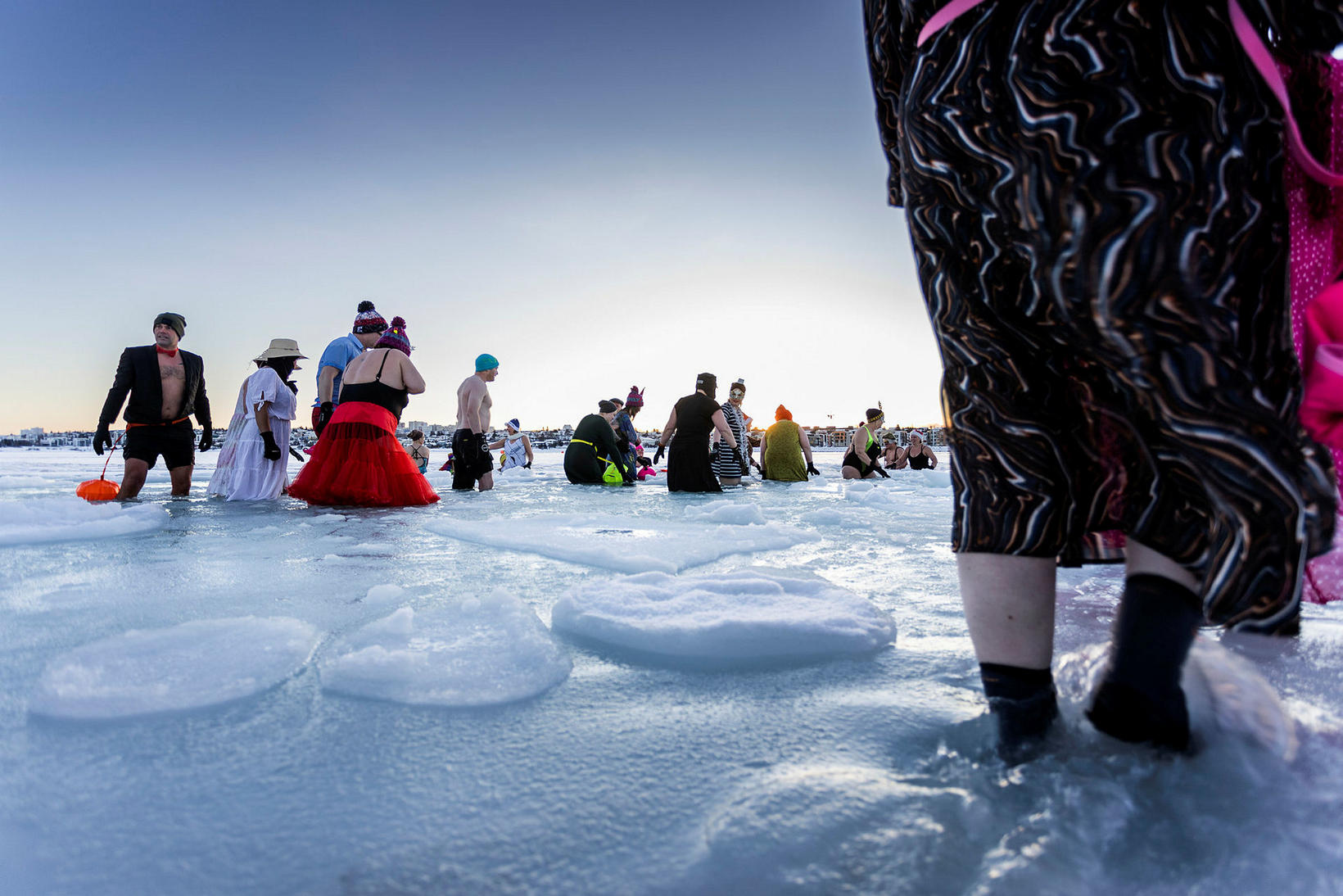 There was a record cold yesterday and the ice is pretty thick before you can get into the sea. mbl.is/Arnþór

However, she says that extreme cold did not stop people from going into the country, but caution was important.

Into the sea in a sequined dress

Þorvaldsdóttir put on a sequined gown to celebrate the new year, but many showed up in their fanciest attire, with many groups dressed in a similar thematic style. She says that the sequined gown certainly helped with the cold. 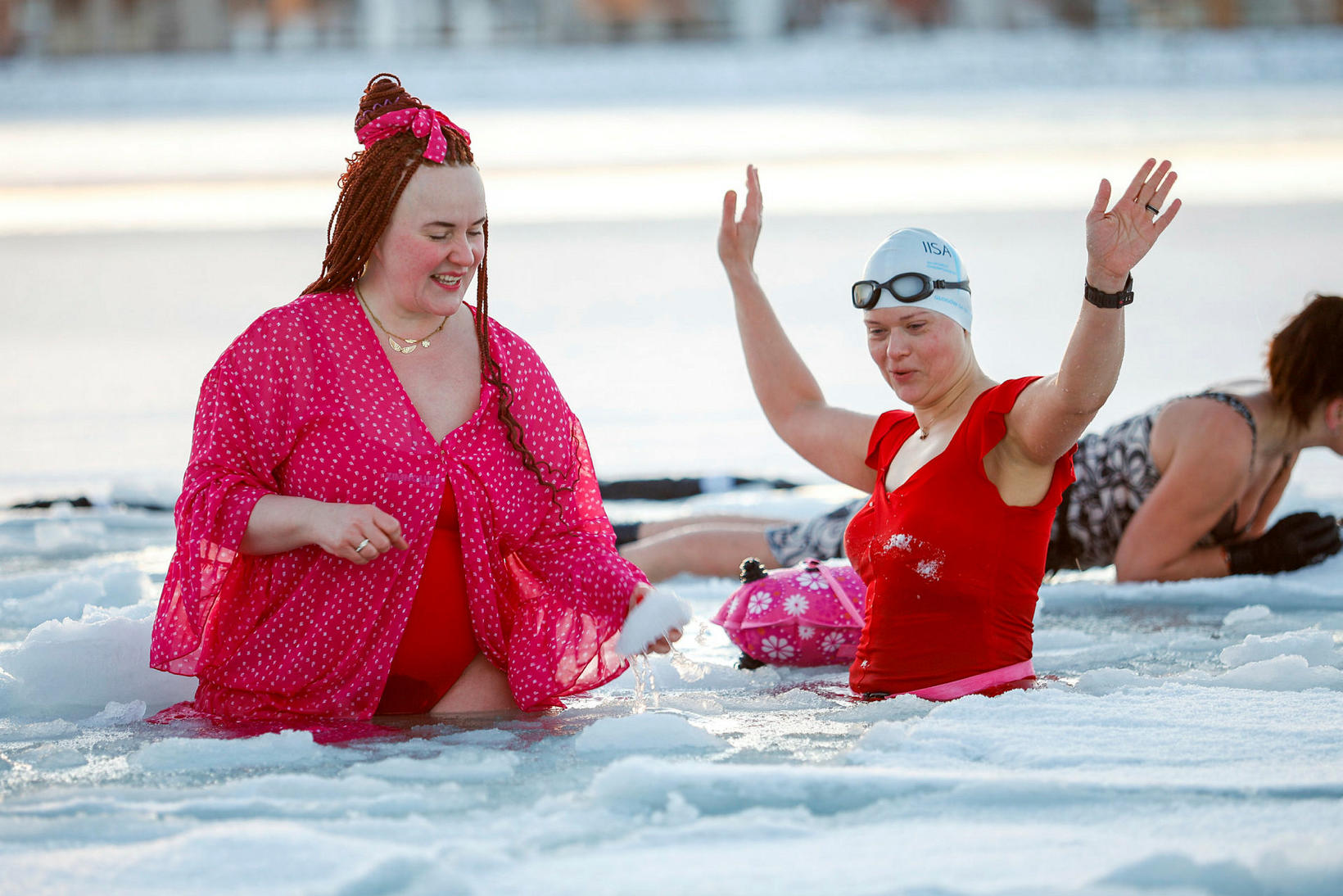 This icy feat sets the tone for the whole year, and why not dress up for it? mbl.is/Arnþór

Þorvaldsdóttir believes sea swimming is a good start to the new year.

“When you’ve done that, and you’ve challenged the laws of nature, it’s such a good thing to go through the day and into the year. Then other thresholds are not as insurmountable as this produces so much well-being and joy. That’s why you think it’s so amazing to start the year with this swim, it sets the tone for the ye ar.” 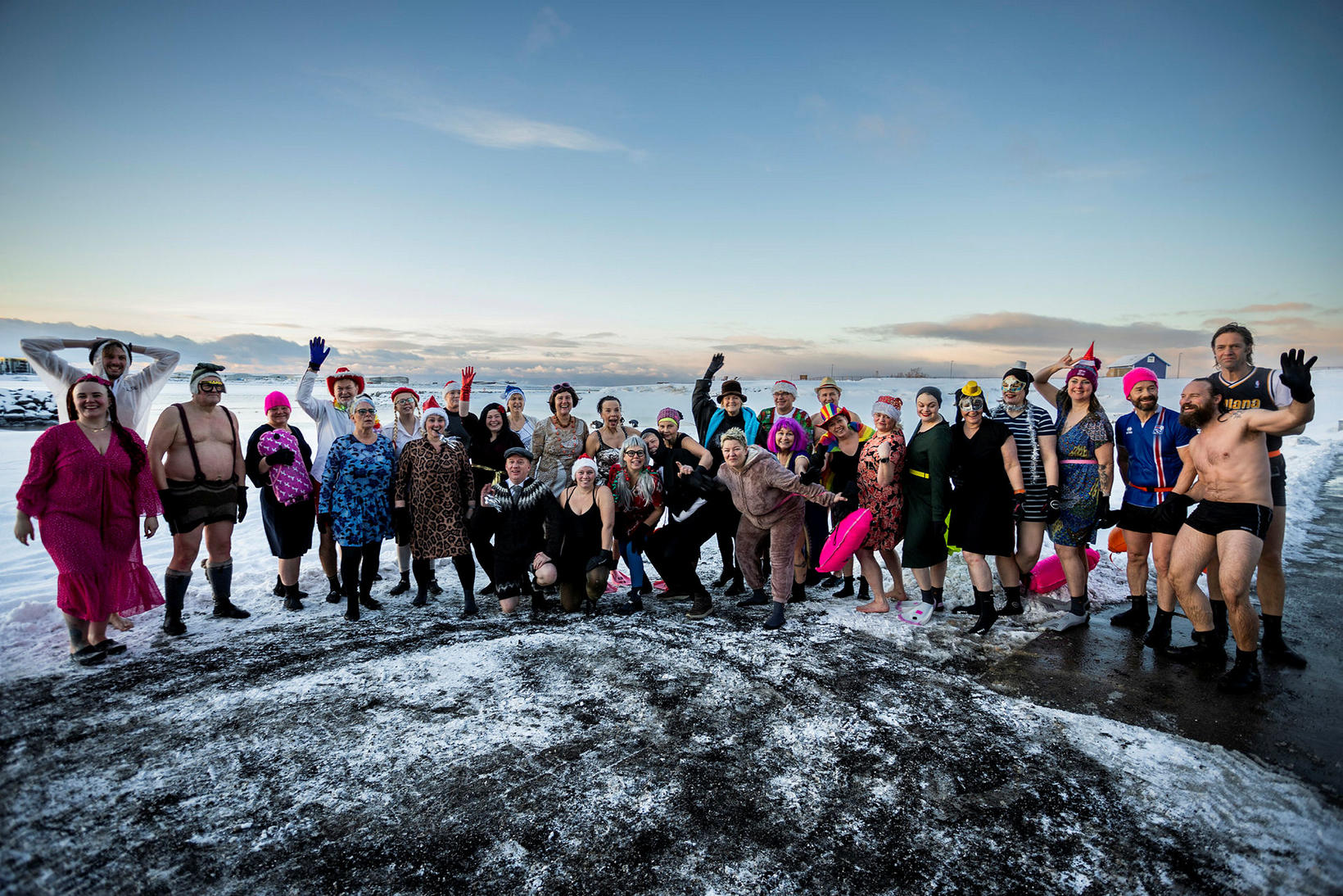 The whole group that participated in the swim on New Year's Day 2023. mbl.is/Arnþór