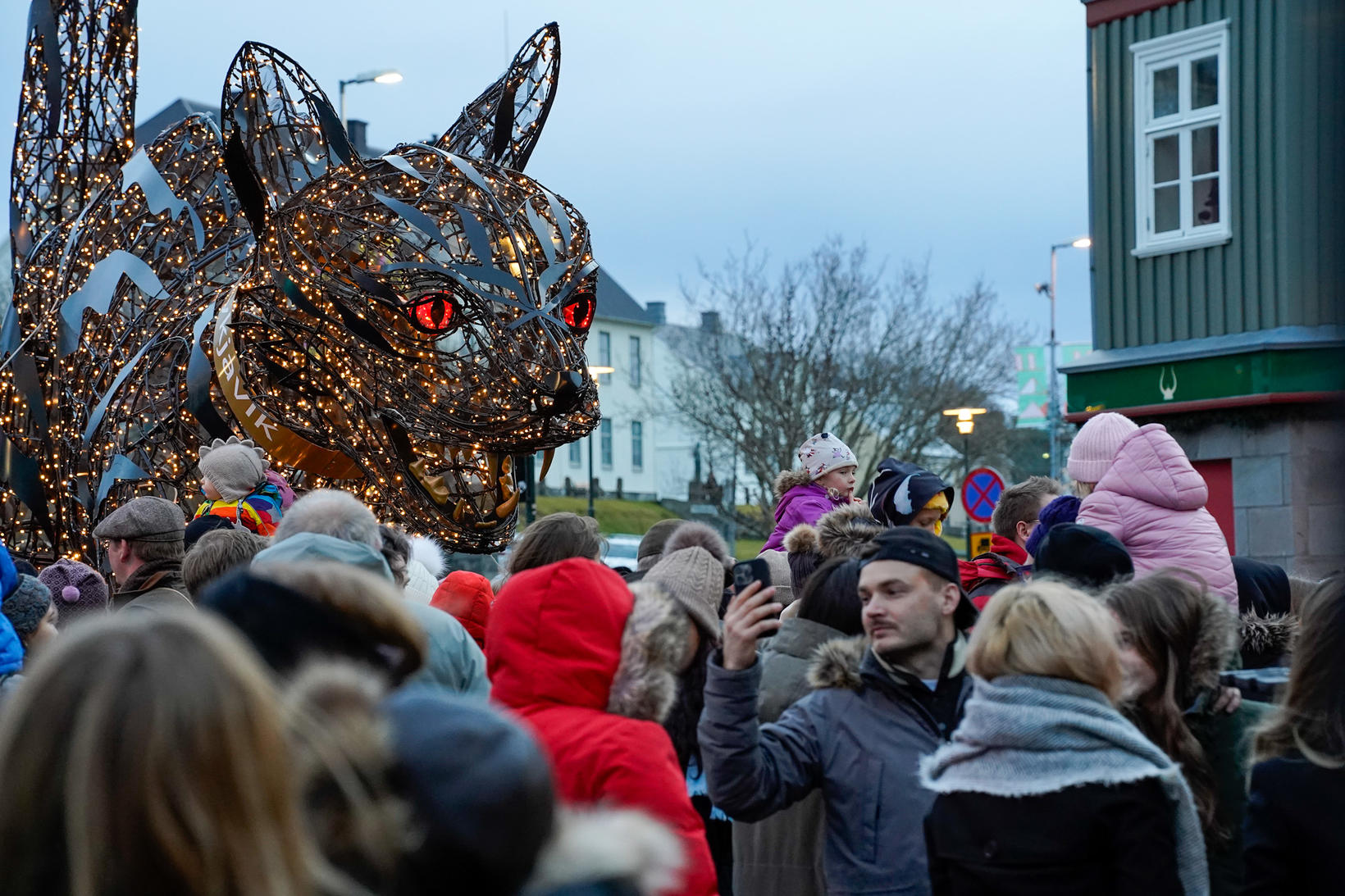 It is better to be on the safe side and ask for some clothing for Christmas so you won't be eaten by the yulecat! mbl.is/Óttar

The lights were lit on the Yulecat in Lækjartorg downtown Reykjavík yesterday. The mayor, Dagur B. Eggertsson was at the lighting ceremony and the musical trio Zimsen sang a few Christmas songs and Grýla and Leppalúði turned up, but they are the parents of the 13 yulelads in Iceland. 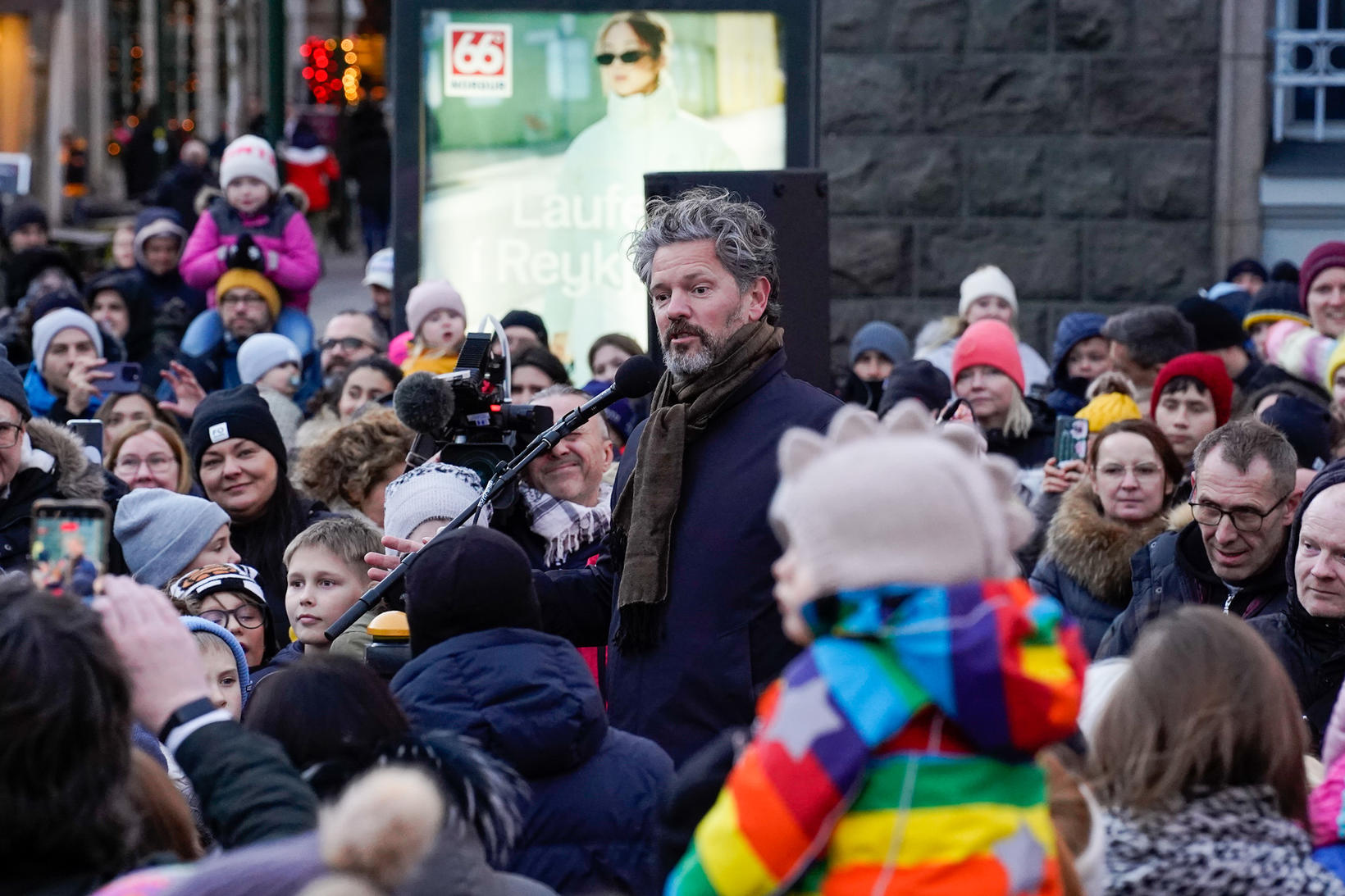 A lot of people were present yesterday when the lights were lit on the yulecat and here is Dagur B.Eggertsson the mayor of Reykjavík. mbl.is/Óttar

The yulecat is about five meters tall and sex meters wide and to light it up there are 6,500 led light bulbs used. The yulecat will be in Lækjartorg until after the New Year in the beginning of January. 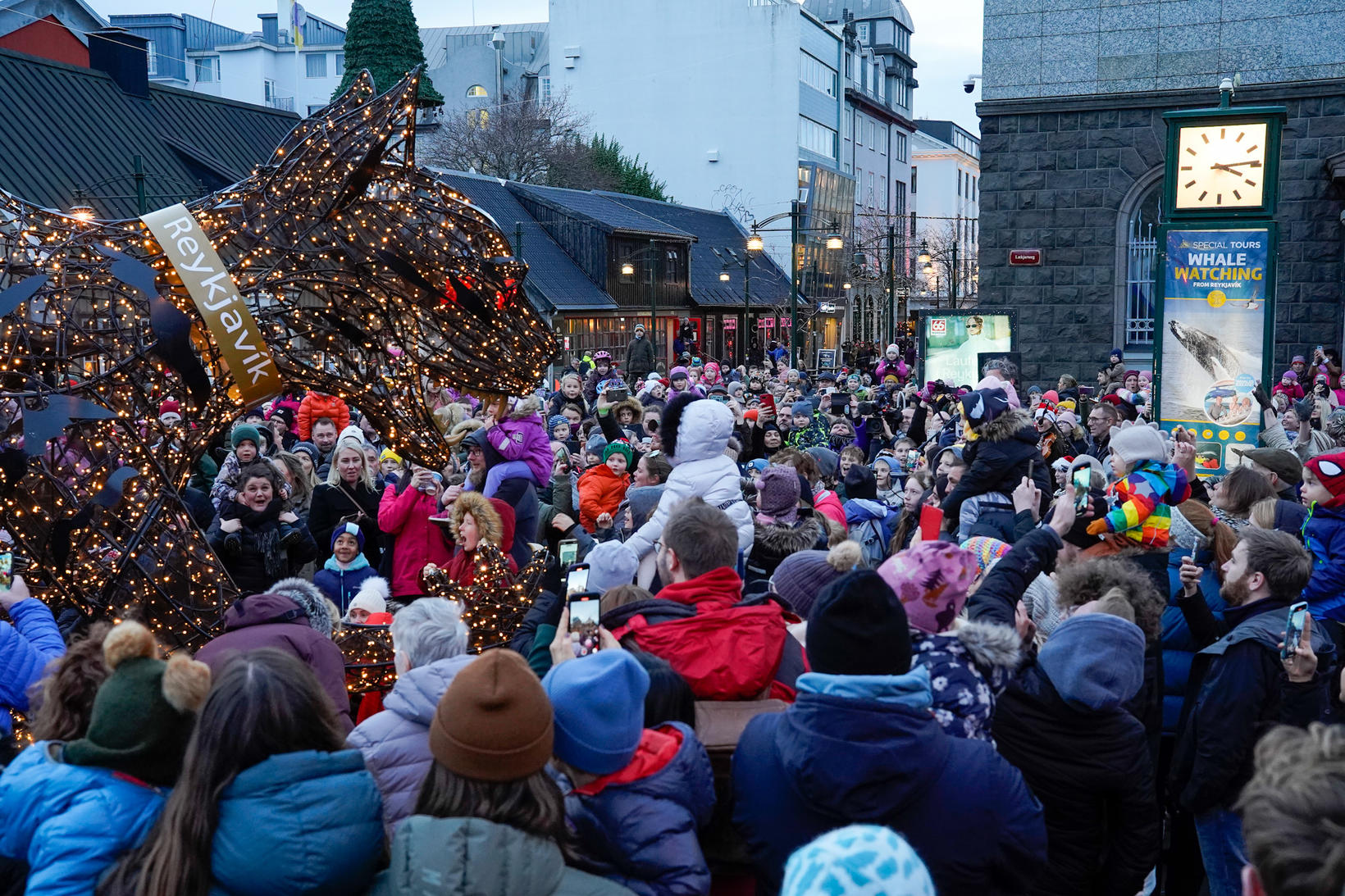 This tradition is one of the things that marks the beginning of the Christmas season in Iceland. The yulelads, are however, a far cry from the friendly father Christmas Santa Claud who brings children gifts during the holiday season. The 13 yulelads are mischievous pranksters who come from the mountains to  people's residences, usually to try to steal something. The story of the yulelads stems from the 17th Century.

In later years the yulelads have taken on a more benevolent image and the first one,  Stekkjarstaur, or Sheep-Cote Clod comes on the evening of the 12th of December and then one by one they arrive, one each day, until Christmas.

Children in Iceland start putting their shoe in the window from the 12th hoping to get a gift from the yulelads and they usually leave a little something, unless the child has behaved badly, in which case they might leave a raw potato in the shoe.

Here you can read more about the yulelads with pictures by Brian Pilkington. 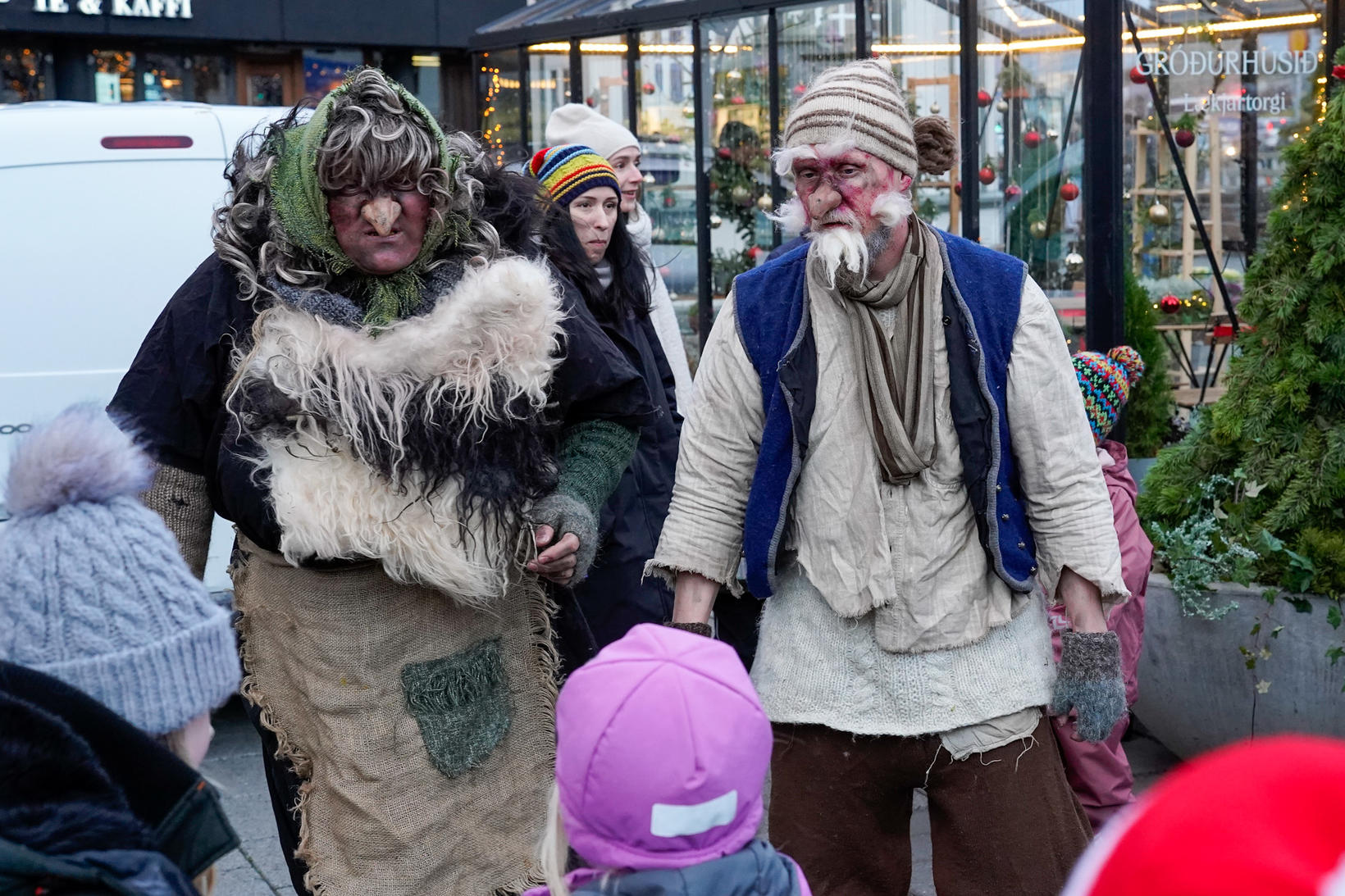 Grýla and Leppalúði decided to show up and as is apparent they are quite menacing in looks. mbl.is/Óttar

The parents of the Yulelads, Grýla and Leppalúði, are actually something to be scared of, Grýla in particular. She is described as a foul looking troll who can spot a misbehaving child a mile away and she might come and eat them!

All I want for Christmas... is a sweater

The same goes for the yulecat. The story goes that if you got no gifts of some kind of clothing, mittens, a scarf, a sweater, you would be eaten by the yulecat. 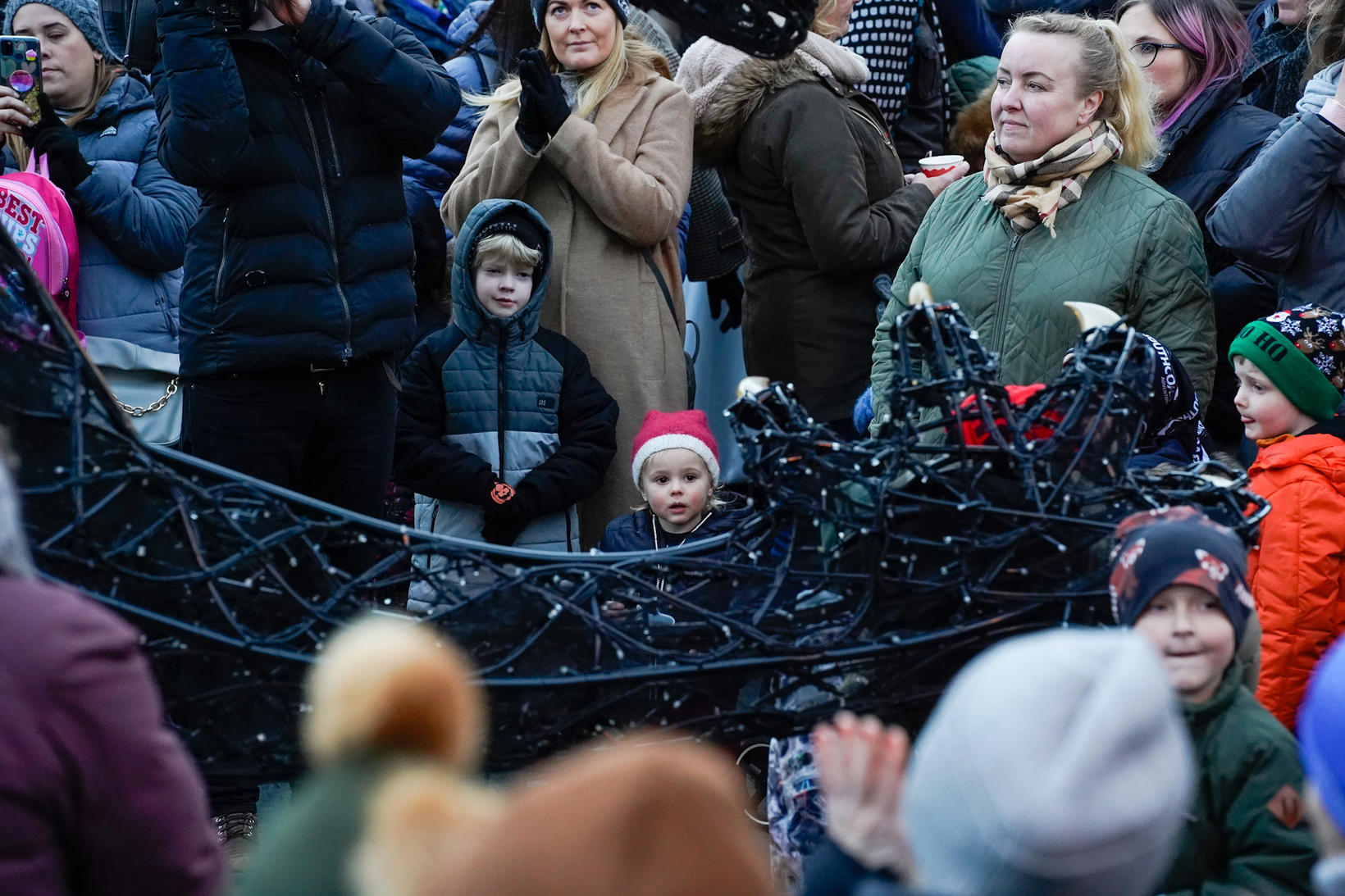 This is all very exciting for the little ones. mbl.is/Óttar