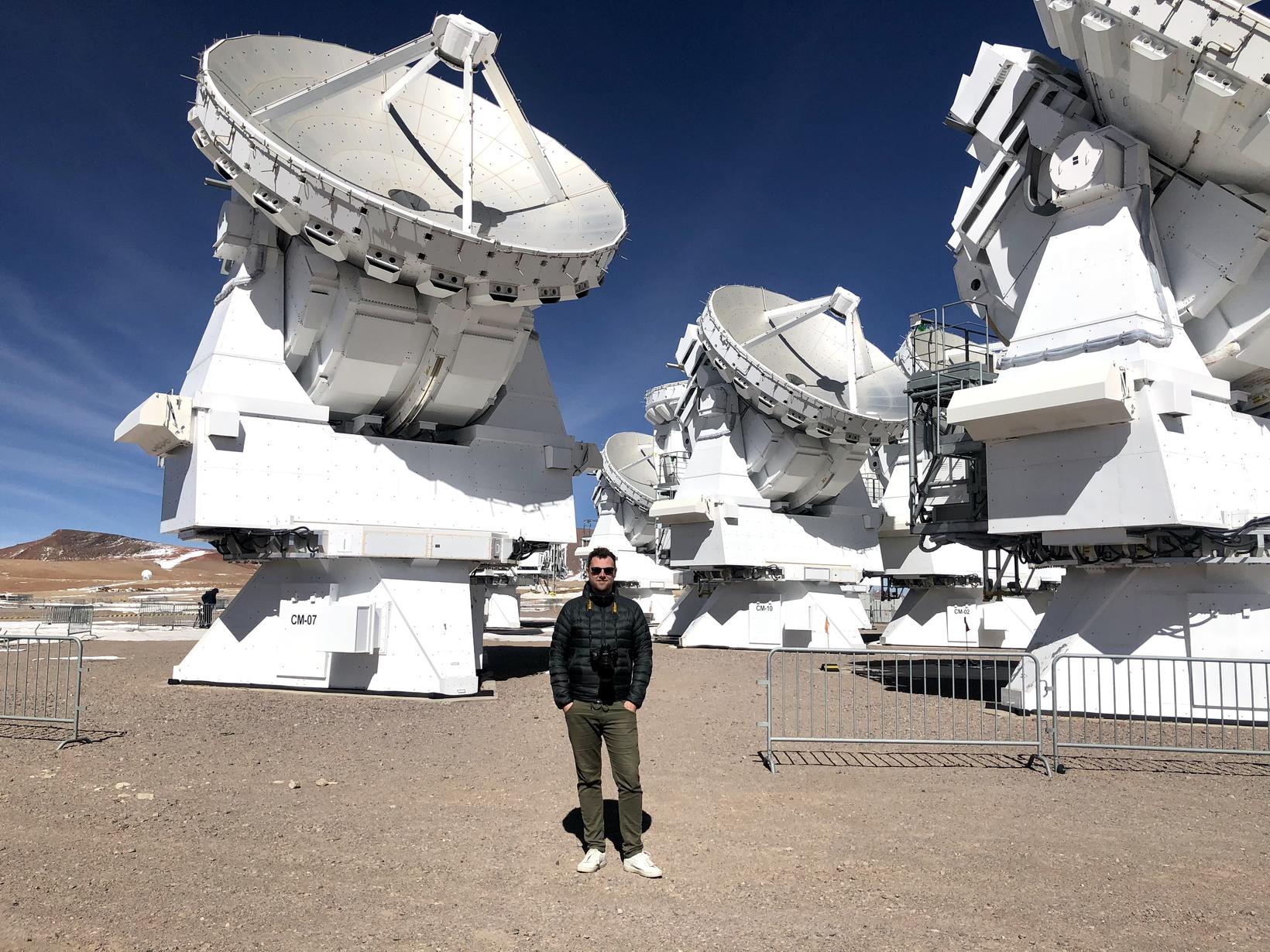 Star Sævar in front of the ALMA series of Telescopes, 5000 metres above sea level in Chile. Photo/Sent to mbl.is

„This started really early. I remember walking to school when I was six years old in Hafnarfjörður and I was watching the stars in the sky,“ says Sævar Helgi Bragason, a science aficionado, journalist, writer, geologist and a resident of Planet Earth.

Sævar is well known by most Icelanders because in the last two decades he has often been in the media when there is something about to happen in the sky above, like sun or moon eclipses, or when the best time is to go to see the Northen Lights or just when there is something interesting to look at in the sky. It could be something that might happen tomorrow or something that was last seen in the 12th Century and might not happen again until the year 2550. 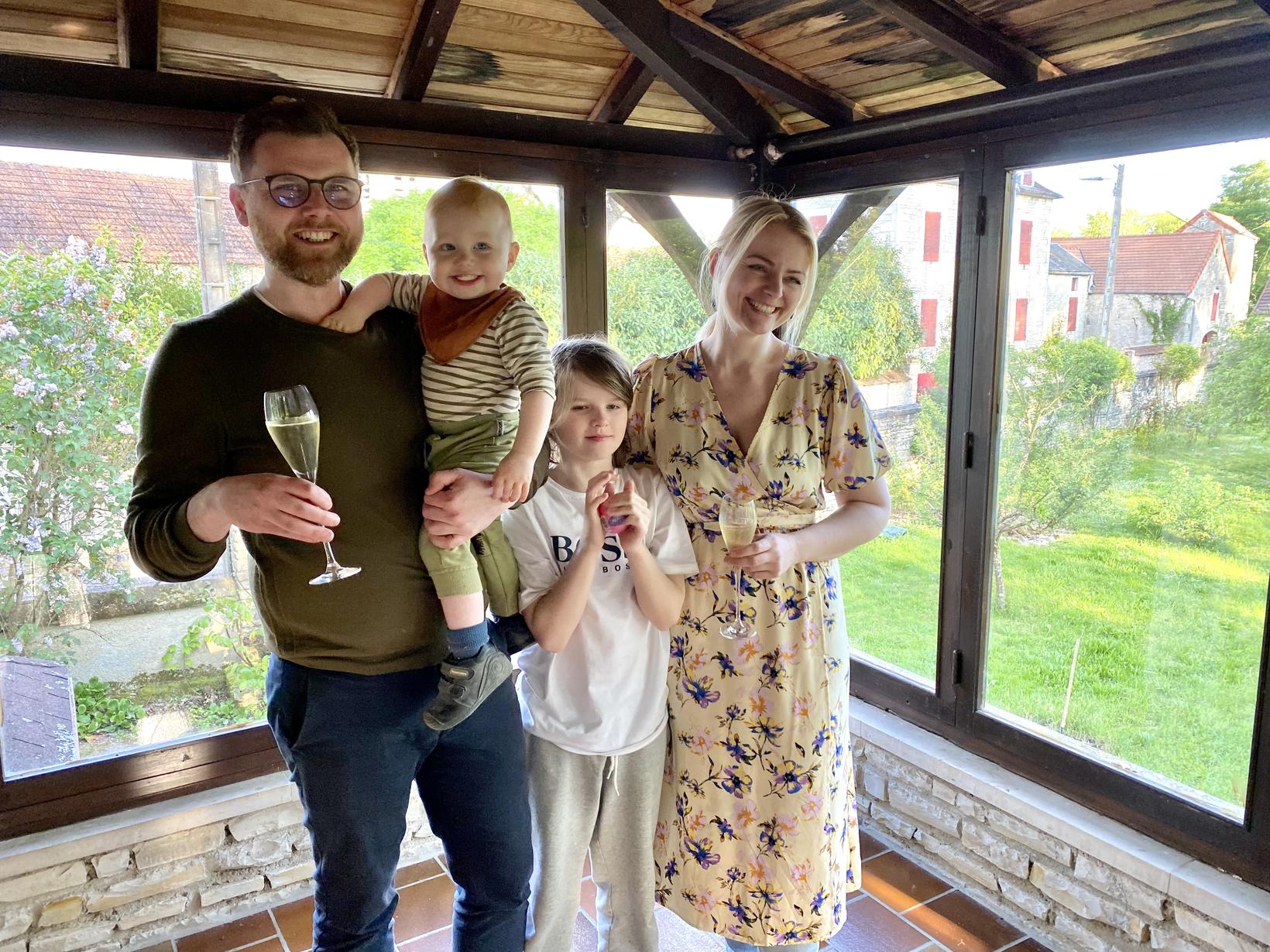 The six year old boy from Hafnarfjörður still remembers other influences that made him very interested in the sky. He mentions trips to his grandparents‘ summerhouse where, in the absense of electric lights, the sky was clear and the stars shone bright in the dark sky. The final revelation was when he saw the sky through a telescope.

Started in the media by accident

“I was permitted to look through the telescope at a relative of mine, named Snævar Guðmundsson. When I saw Saturn and the moon for the first time through the telescope there was no turning back,” he remembers. No wonder his nick name Star-Sævar stuck, and he has been called that for years now.

“Then my interest just grew the more I learned about it and now my passion is at the level that I simply want to tell everybody about how amazing our world is and how much fun it is to study the heavens,” says Sævar who, in spite of his passion, did not travel that road at University, but rather kept to the ground, so to speak.

“I have a B.Sc. degree in Geology. There was no astronomy field at that level at University, except as a masters. I was planning on getting an education in planetary geology, become an expert in Venus, Mars and the moon and more,” says Sævar. “That line of study is available in the United States where I know a lot of professors in this field. But then life just happened. I somehow went into Media and since then I have been telling others about what I know and teaching this.” 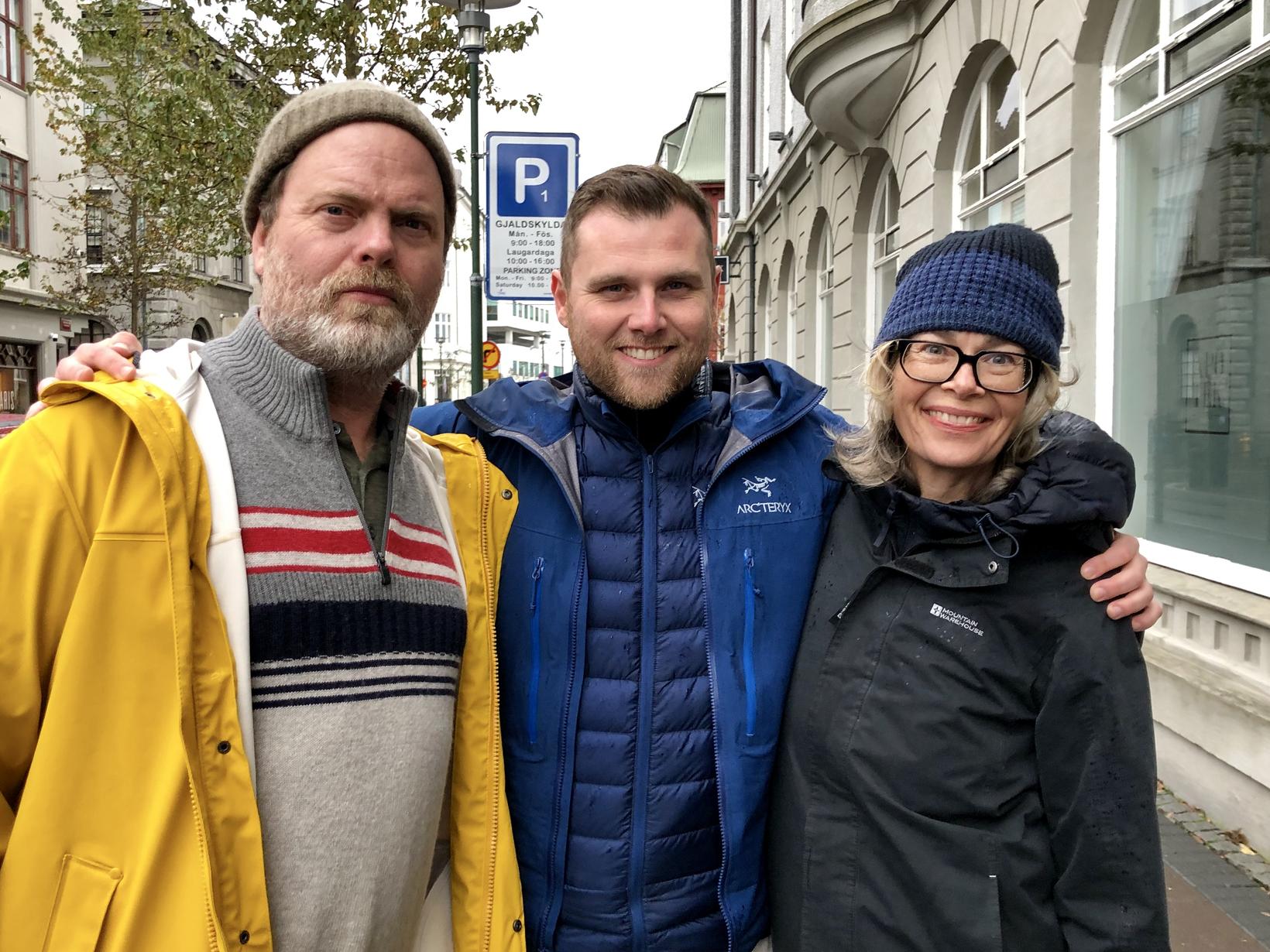 "Here I am with the Office actor Rainn Wilson and Gail Whiteman, professor of sustainability at the Exeter University in England. Photo/Sent to mbl.is

A foodie and a science buff

However, he managed to take three courses in astronomy at the University, but most of his knowledge comes from his endless curiosity and self study in science and other things that he gets interested in. “I am a runner, a foodie and a passionate science nerd,” he says about his life today, which he shares with his partner Þórhildur Fjóla Stefánsdóttir in Fossvogur Reykjavík. She works for the IT company Wise and she and Sævar like few things more than eating and drinking well.

“We actually travel to get some good food and now we are on our way to Copenhagen just to have dinner at the restaurant Geranium, which now has three Michelin stars and was recently appointed the number one restaurant in the world,” he says. Sævar is the father of two boys, Arnór Bragi, 11 years old from his previous relationship and Jökull Máni, who is a year and a half whom he has with Þórhildur.

Star Sævar has met a lot of scientists over the years because he has been active in going to conferences all over the world. “I know people who are working on the Mars expeditions, people who are investigating the planets in the outer solar system, and people working on the Hubbles- and James-Webb telescopes. This is not really a big community and people get to know one another pretty well. One of my best friends is a professor at Leiden University in Holland, Pedro Russo, and he is also well connected. Whenever I meet him, I meet a lot of other people in the field from all over the world,” says Sævar. 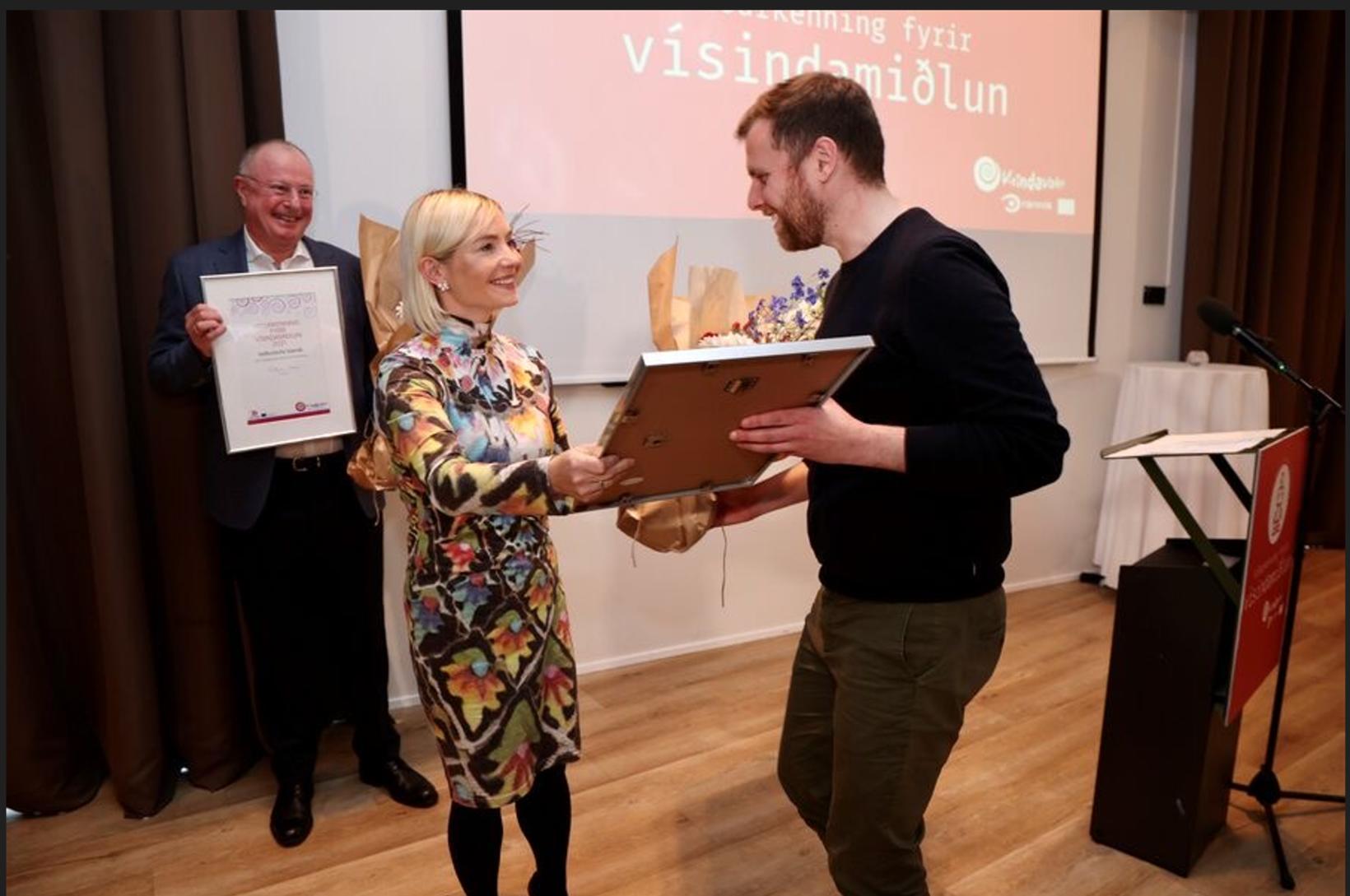 Sævar accepting the RANNÍS science media award in 2021 from Lilja Alfreðsdóttir, who was then the Minister of Education. Behind her is Árni Snorrason the director of the Met Office. Photo/Sent to mbl.is

Covid was a big set back

Sævar just stopped working for The Environment Agency in Iceland, “but apart from that I have been writing books, making TV shows, giving lectures and showing people the sky and I have made a living doing that for quite some time. I wanted to secure myself and make sure I didn’t put all the eggs in the same basket, but then Covid hit and then all the eggs dropped out of all the baskets. Suddenly it was impossible to visit schools and all public life almost came to a standstill so I applied for a job at The Environment Agency and got it, which I am very grateful for and I have learned a lot in a short amount of time,” he says, but still wants to move onto different ventures.

He is starting a new job with KPMG, a job in educating businesses about sustainability and societal responsibility.

“So you can see that I take all kinds of jobs on top of the things I am always investigating,” he says.

Iceland is very well located when it comes to tracking the action in the sky. “We are living under the aurora borealis which is amazing and we don’t have to go far to get away from the electric lights in the city to get good darkness to watch the sky.” 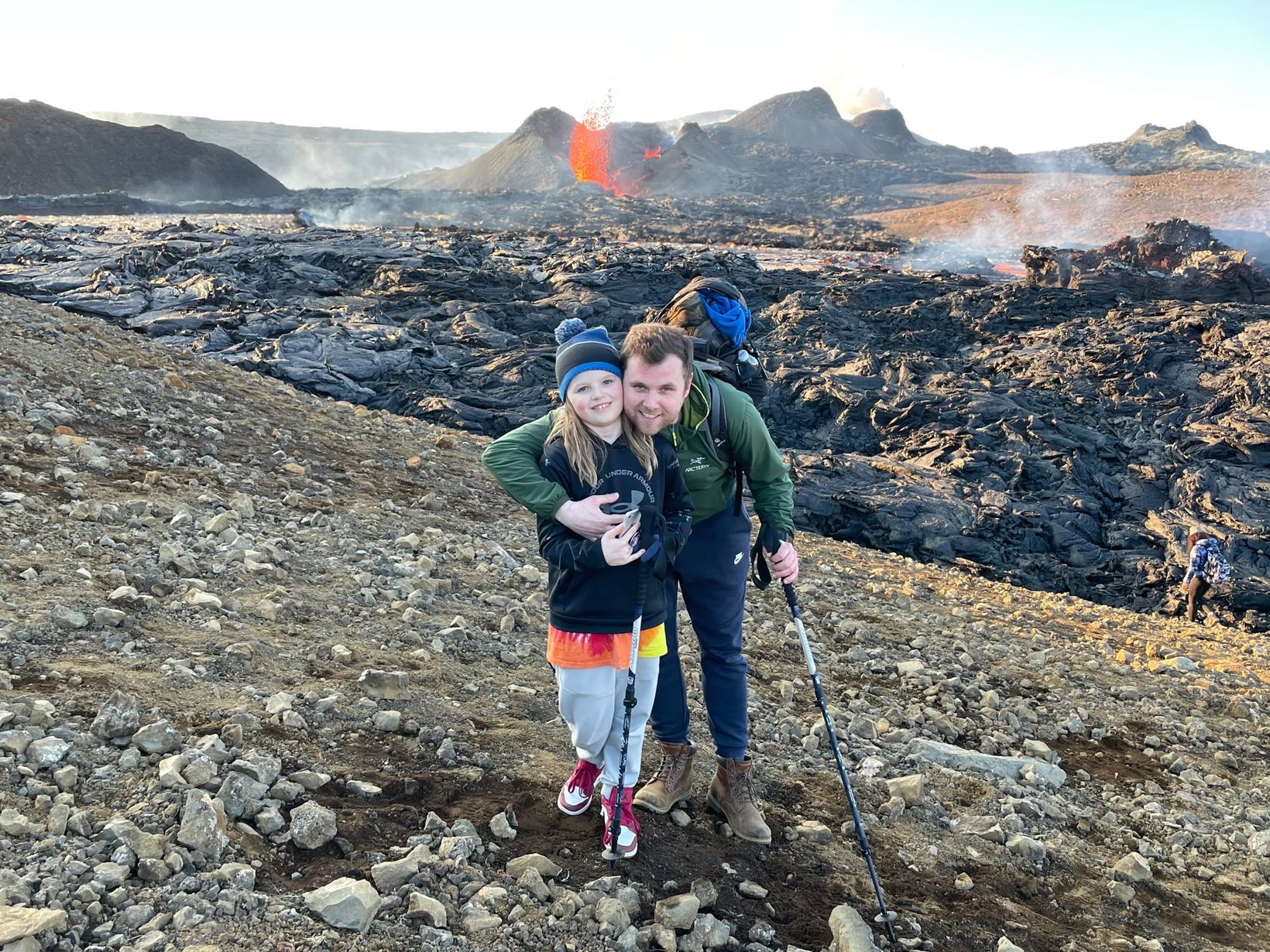 „This hairy thing is actually my son, Arnór Bragi, who decided at one point to grow his hair," answers Star Sævar when asked about the girl in the picture. "He has cut his hair now. This was the best father and son trip I have ever been on." Photo/Sent to mbl.is

“I was only 15 or 16 when I was first interviewed on Kastljós TV show. It was the year 2000 and after that I was asked to come back again and again. Astronomers at the University recommended talking to me, even though I had not even studied with them, and the ball started to roll. I was told that I spoke in layman’s terms so everybody could understand what I was talking about.”

But Star Sævar is not getting away without answering one of the big chliché questions out there: Is there life on Mars? “I will give you the chliché answer which is: I just don’t know!,” says Star-Sævar and laughs. “There are a lot of exciting clues about running water on the surface and energy that could sustain some form of life. It is not impossible that there once was life on Mars, but we haven’t found it yet, and that is why we are still searching.”

The late physicist Stephen Hawking drew world attention with his writings and lectures about the physics of the planets, about life in other places in the universe among other things. He said, in a lecture shortly before he died in 2018, that if there was intelligent life out there which had the means to travel to earth, we would not want to get that visit. What does Star-Sævar think about these words? 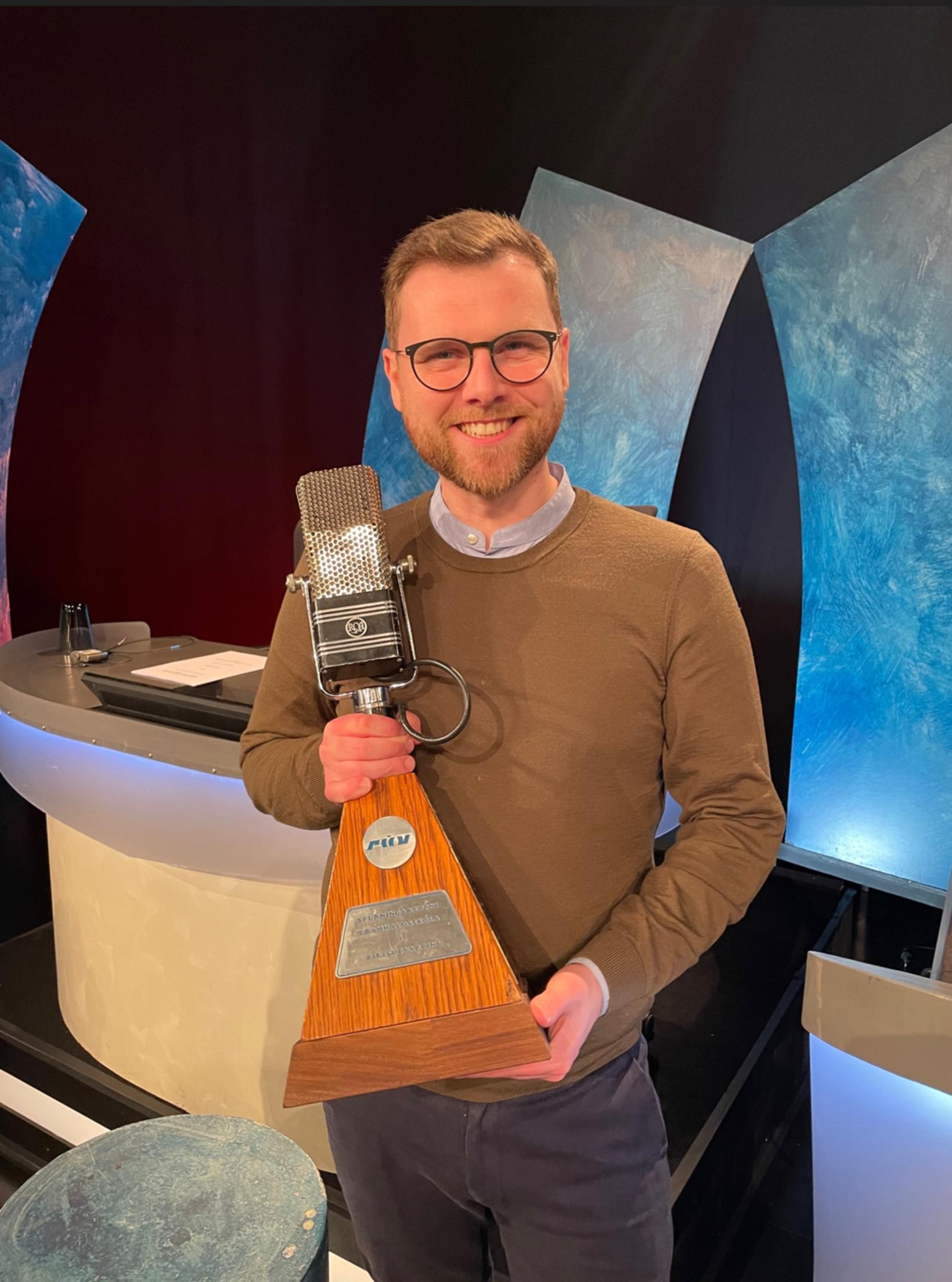 „Here I am saying goodbye to "Guess better" after working on that TV show for five years as a judge and writing the questions." Photo/Sent to mbl.is

“He could be right. This is just like being in an unknown area, in a rain forest, for example. You would not start shouting to draw the attention of others to yourself, others who could easily attack you. He said that it made sense to not let the universe know too much about us, because we could be discovered regardless. However, we have unknowingly been spreading noise in the universe which can be detected,” says Sævar.

He still says that species outside of earth would most likely only come here looking for information. “If they were looking for resources, those same resources would be present where they are from and most likely closer to them than earth. But there are these theories about other communities out there who are trying to colonize our whole galaxy. This would not take that much time, perhaps a few million years which might seem like a long time in our world but is a short time by galaxy measures.”

What about endless stories and reports about flying objects which have served as an inspiration for authors of movies and TV shows? Do these stories always have a natural explanation?

“I cannot talk about this,” says Sævar and bursts out laughing. “No, jokes aside, I have usually been very sceptic when I hear these stories. Maybe the reason is that I get a lot of stories from people, pictures and information about things that people think they saw in the sky,” and he adds that in almost all instances there is a natural explanation when you really start to investigate. “You will almost always find explanations that are annoyingly earthly and thereby no fun at all,” he says and smiles.

Arrogance to think we are the only ones

“I think it is very arrogant to claim that we are the only ones in the universe,” he says when asked about it, “and the idea that we are very special is also a misunderstanding. There are so many planets out there, that it is impossible to imagine that there is not life out there, whether it is shorter or further along the development scale, which is something I do not have a clue about. But it is arrogant to claim that it is only us, and I think very few people do that today.” 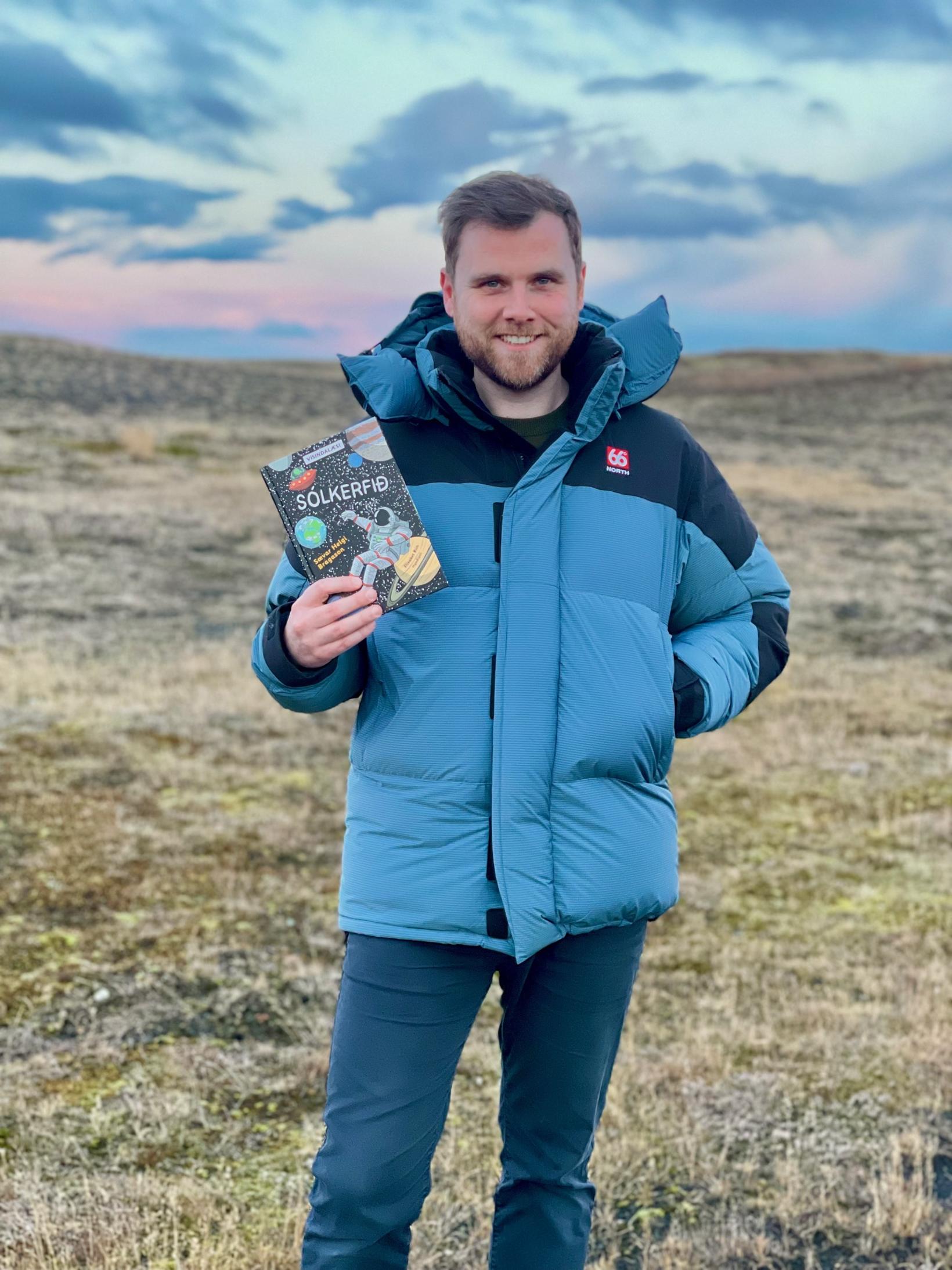 „The Solar System is a light reading for kids from 6-7 to 12 years old and is part of a series called "Understanding Science". This year another book was published in the series, The Environment, and I am working on more easy reading books for kids about science." Photo/Sent to mbl.is