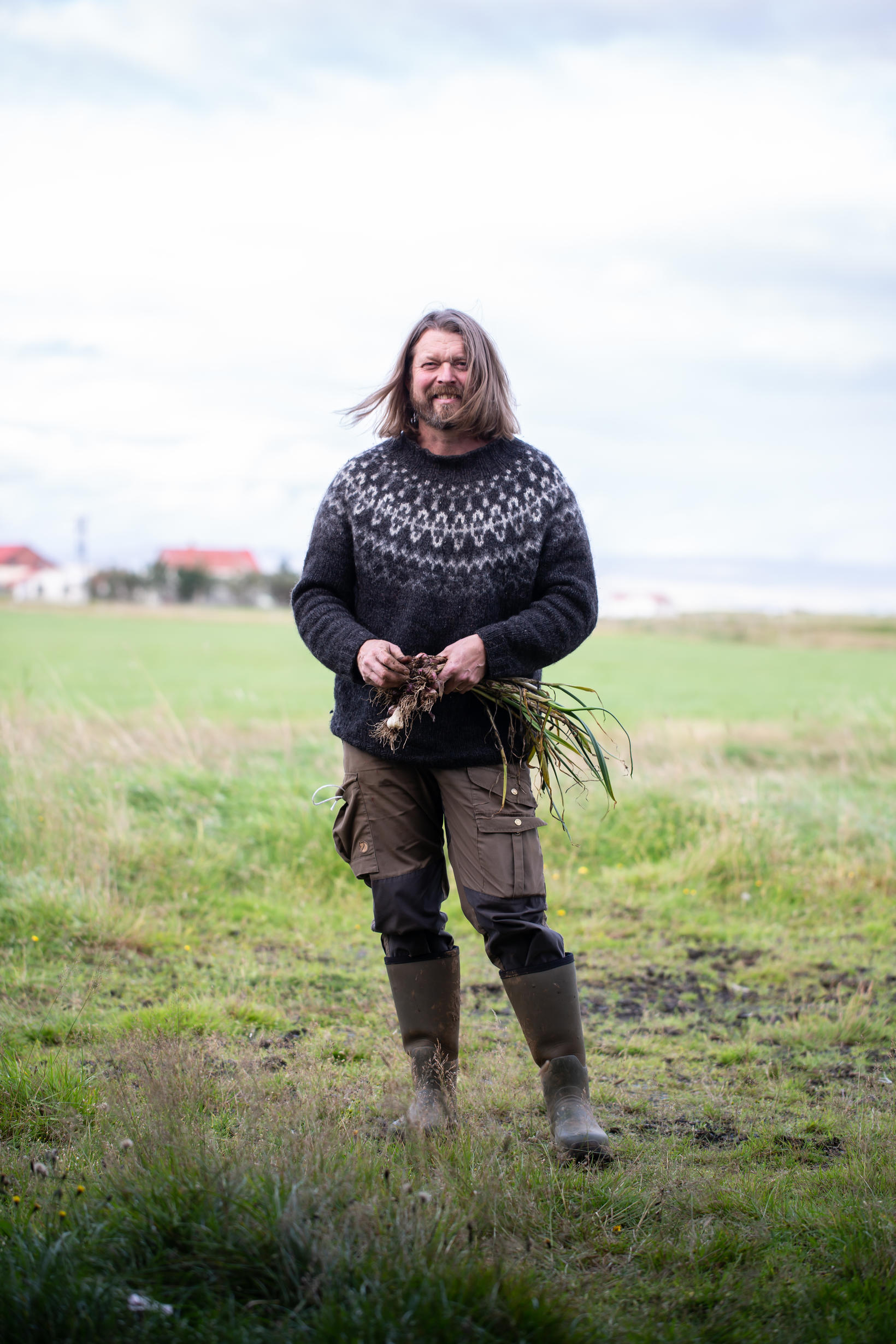 Hörður Bender has been growing garlic for two years but these days he is harvesting for the second time.

For the last two years there has been an experimental harvesting of garlic in Austur-Landeyjar and they have been trying a few types of garlic. Last year the farmer Hörður Bender in Efri-Úlfsstaðir harvested one ton of fresh garlic which went directly to the supermarkets for sale and it was a huge hit, and sold out within 24 hours. This year Hörður is trying something different, so Icelandic lovers of garlic can expect a new product of garlic salt on the market before Christmas. However, the outlook for growing garlic has been bleak mostly because of very dry summer season in Europe.

"We started two days ago harvesting the garlic," Bender says when a journalist from mbl.is got a hold of him. Bender is still working on finding the best kinds of garlic for Icelandic conditions and  two of the four varieties of garlic he started growing last year did not thrive and died last winter. However, out of these four types there were three new varieties, and one of those was successful.

The battle between the garlic and the weeds

The weather in Iceland this spring and summer has been very positive for growing garlic. However, a new problem came up which many people growing vegetables have encountered. "We had quite a bit of weeds because we are growing the garlic organically and don't use any pesticides," Bender says. "The weeds take energy from the garlic so you could say that the garlic is battling the weeds for survival."

For this year Bender decided to put down a lot more of seed garlic and planted 1.5 tons which should give a good harvest this year. He says it is difficult to estimate the harvest but he is hoping for five tons of fresh garlic. But it is not an exact science and the give might be less than that. When you dry the garlic its volume and weight diminishes by almost a half, so the selling product is quite a bit lighter than the harvested product.

Last year everything sold out in 24 hours

As we said earlier the last year's harvest sold out in 24 hours and Bender said that many had been disappointed to have missed the harvest. "My mom did not even get garlic," he says laughing, but it is clear that this cannot happen the second year in a row. So after pondering over options to make the garlic available for more people the idea of the garlic salt was born. Bender and his family have been trying a few versions of it. "It was excellent, very tasty and a completely new flavour."

The new garlic salt for sale before Christmas

"We are going to offer Icelanders our garlic salt this time," he says and the plan is to have it ready for sale before Christmas. Bender buys Icelandic salt and then mixes it with the garlic.

Bender says that he is looking at his operation as a long term venture and the plan is to increase the harvest a lot to be able to meet the demand of the Icelandic customers. "Icelanders eat around 200 tons of garlic every year and I want to see us grow that garlic right here in Iceland." 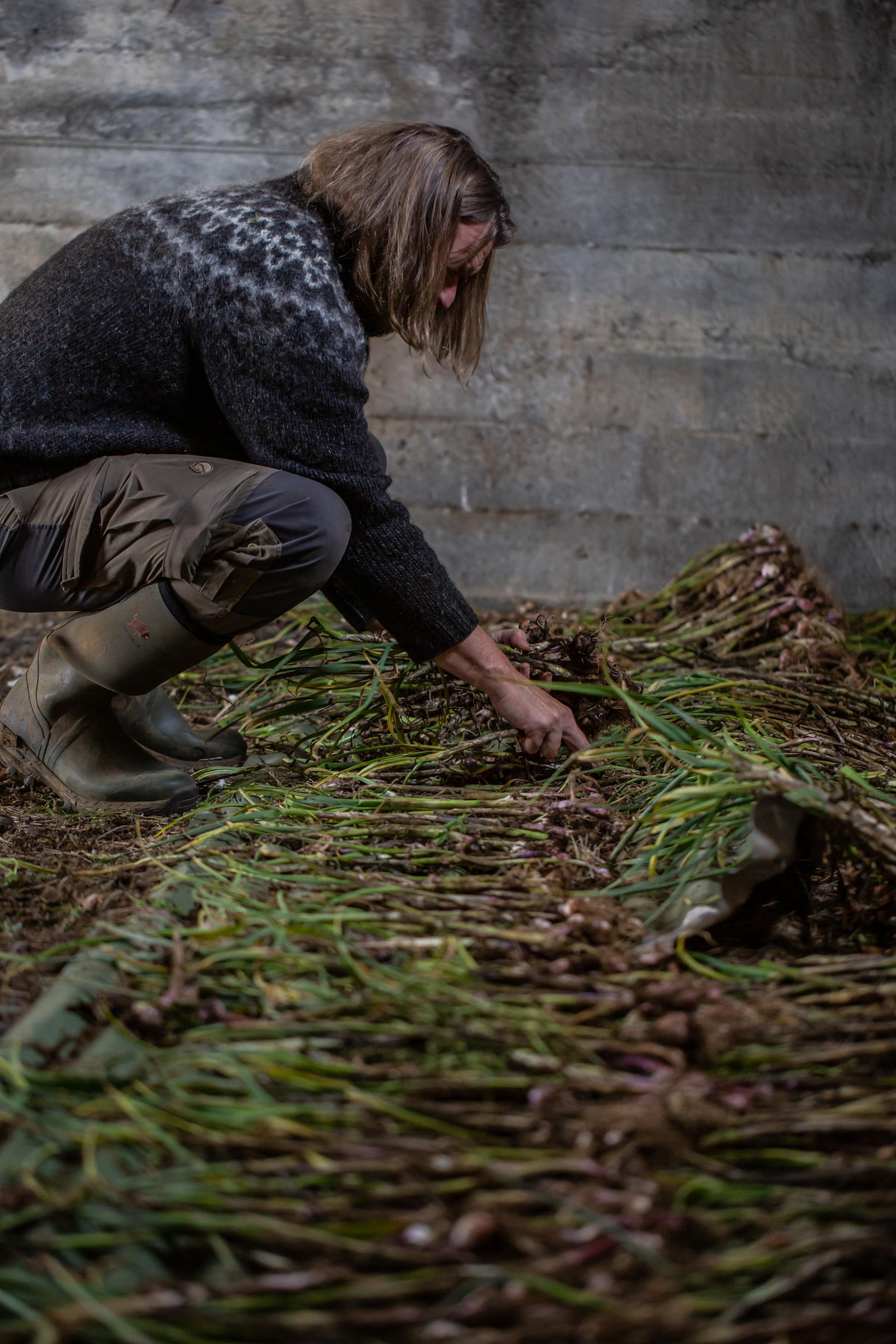 The garlic needs to be dried after it has been harvested and that process results in the product shrinking almost by half.

Last fall he put down garlic seed in 8 hectares of land, but it might not be as much this year for the next summer. The reason for that is not the lack of will or ambition, but the problem has been getting the garlic seed to put down.

The varieties that have been doing best here come from France, but because of the heatwave this summer and the extremely dry season, it has been almost impossible to get any garlic seed from them, as well as from Spain, Portugal or Italy, which are the biggest countries in growing garlic in Europe. "It was all dried out and dead and I needed to go to Scandinavia to get as much as I could of garlic seed to put down," he says.

Again in the starting phase

He managed to gather one ton of garlic seed from Scandinavia and even though it seems to be a similar variety as the French one he was using and thrived in Icelandic conditions, he feels like he is again in the starting phase. "This is not as much as I wanted, and not the same variety that I have tried and tested. Although I have learned a lot since I started growing garlic it feels like beginning a new." He also adds that it is different to have a variety to grow in big fields, than what people are growing in small boxes or in smaller sheltered areas. In the bigger fields the variety needs to be able to withstand the wind and thereby be stronger.

Bender has been investing in machinery for the production in the last two years. He says he is interested in thinking bigger and producing more, but it does not make any sense right now until there is more security and stability in the harvesting, both when it comes to which varieties are the best ones and secondly whether he can buy the garlic seeds he needs every year. 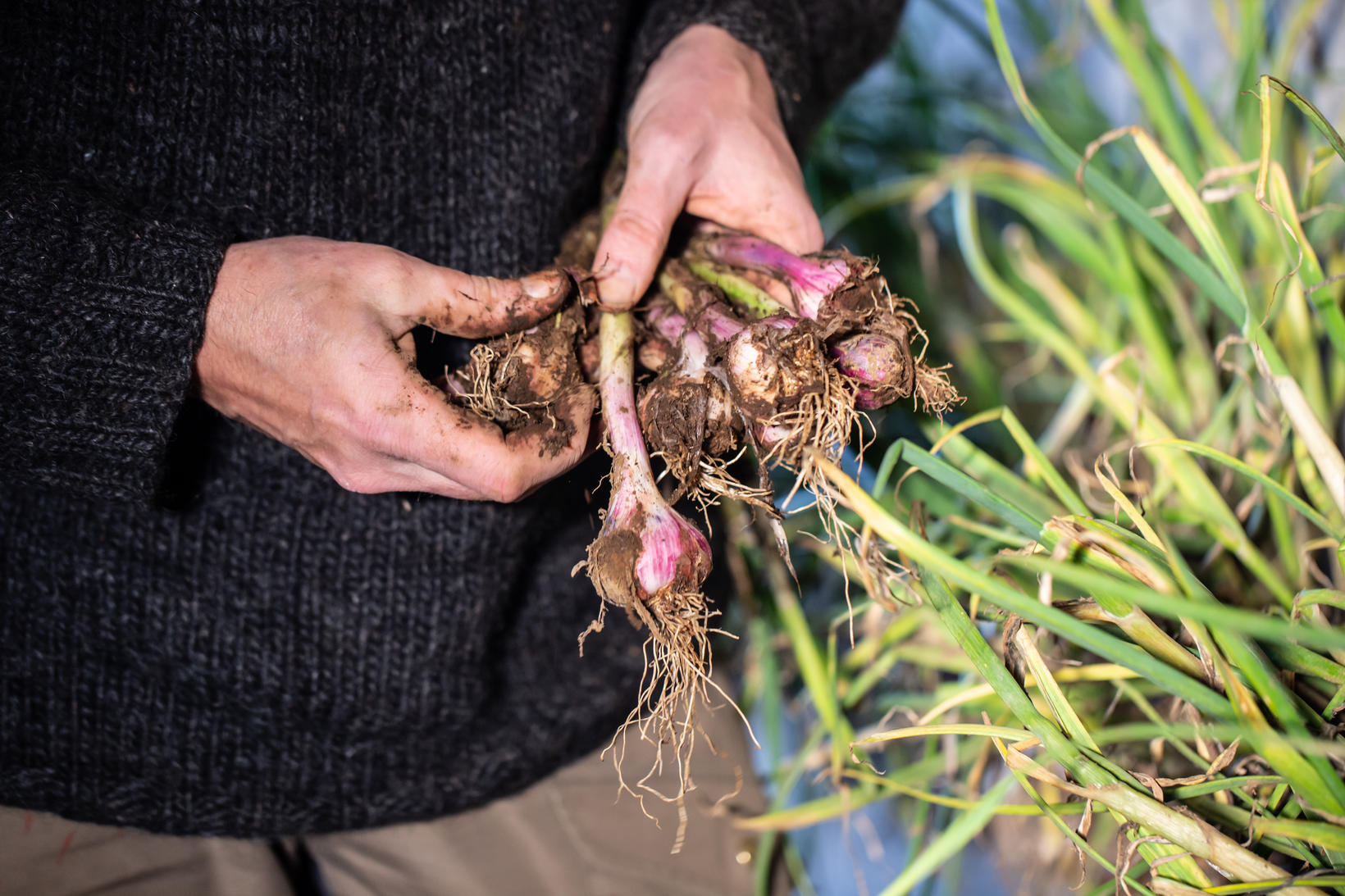 The variety that was doing really well came from France but this year Bender needed to gather garlic seeds from Scandinavia because everything was dried out in France due to the extreme heat this summer.


Fighting the wind, but the soil is excellent

Apart from the weeds the wind is the biggest enemy of harvesting garlic. But on a positive note, the soil is excellent for growing garlic. It is the mixture of volcanic ash as well as a lot of sand in the soil which is an excellent bed for the garlic. In order to fight the wind, Bender and his family, have been planting trees, actually 30 thousand of them, to shelter the fields and he says that it will be great after a few years, with more shelter from the wind and a warmer soil because of it.

He says that Icelandic farmers should look more to Scandinavia. There the farmers have been dividing the fields into smaller areas surrounded by trees to shelter from the wind. "The ideal condition for growing needs to be created," he says and it is clear that his venture in growing garlic is a long term process.