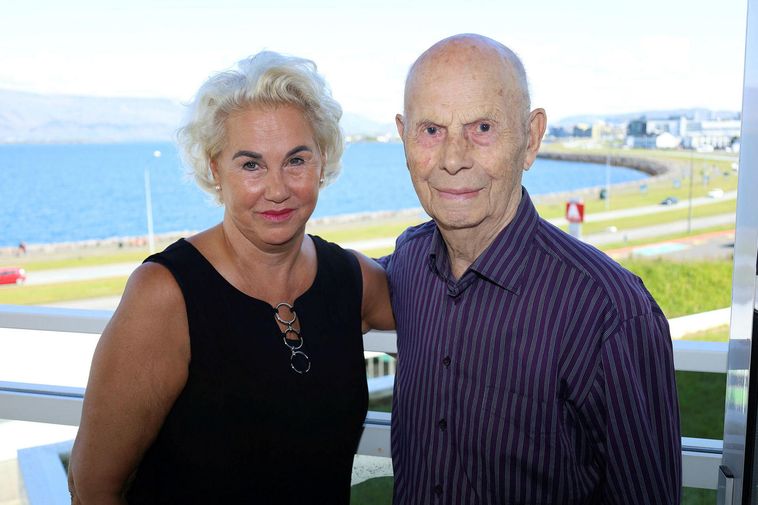 Agnes and Jens Albert Pétursson, her father. He is originally from the Faroe Islands but has lived in Iceland since 1945. mbl.is/Sigurður Bogi

"My health is good, although it is in line with my age. A few days ago I got my driving licence renewed and I am very happy about being able to get about in the car. However, I rarely drive far and I only drive when the weather conditions are good," says Jens Albert Pétursson who becomes 100 years old today.

Pétursson is from Suduroy in the Faroe Islands, which is the southernmost island of the Faroe Islands. He has lived in Iceland since 1945 and was for a long time a sailor, but later he worked in a printing facility and the last years of his working life he was a night porter at Ás, which is a non profit organisation that runs centers for people with disabilities.

"I've had a good life and I am grateful. I have always felt that it was important to have enough to do. I also found it very fulfilling to work and I also liked doing social work, like Christian work and working for the association of people from Faroe Islands in Iceland."

Pétursson was married to María Pétursdóttir, who was also from the Faroe Islands. She died in 2007, but then they had been married for 56 years. They had four children, the daughter Agnes and the boys, Oddgeir, Hjalti Sævar and Pétur, who all live in the Faroe Islands.

"I have a great dad," his daughter Agnes says, but she is preparing for her father's birthday. The family and friends have been invited to come to Skipholt in Reykjavík, where the Faroese fisherman's home is located, but Pétursson was one of the people behind building the home and it is one of the many things he has done in his long life.

Long life runs in Péturson's family and his mother, Andrea, became 101 years old. His sister, Myrthley Helen, will be 98 years old later this summer, but the siblings live in adjoined apartments in the senior community at Vitatorg in Reykjavík. Pétursson's siblings were nine in total.