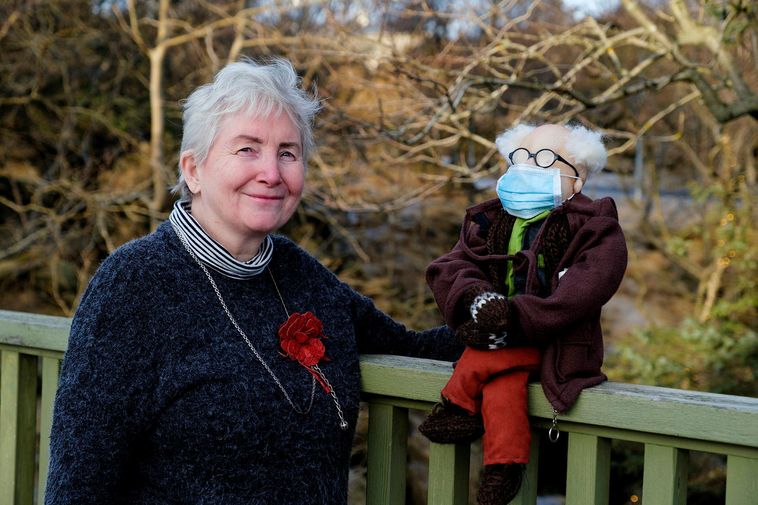 “Bernie Sanders caught my attention by being a charming man who wants to have a positive impact,” Arndís Sigurbjörnsdóttir, a resident of Hafnarfjörður, Southwest Iceland, tells Morgunblaðið journalist Sigurður Bogi Sævarsson. She has created a Bernie Sanders doll. “I watched him on TV during the presidential inauguration ceremony in the US, and shortly thereafter the idea for a doll was born.”

Hafnarfjörður is known as a town of elves, and Arndís lives near the park Hellisgerði, where their population is reportedly the densest. Her home is filled with hundreds of dolls of all shapes and sizes, which she has made herself.

These days, artists all over the world enjoy making works of art inspired by Bernie Sanders, who twice sought the Democratic nomination in the presidential primaries. He attended the inauguration ceremony January 20, wearing a parka and mittens that at first sight looked very Icelandic.

“The doll didn’t take long to make,” Arndís states. “The body is made of nylons, with pillow stuffing, and then I sewed the clothes: a fleece sweater, and the slacks are made of old window curtains… The white hair is made of wool, and the glasses are made of plastic.” She adds that as a rule, she only makes dolls resembling people who have a good influence.

Sanders is one of very few men in the home, since most of the dolls are female characters. One of Arndís’ latest dolls is a Valkyrie who fights the pandemic and obeys Chief Superintendent Víðir Reynisson. “I love creating things,” Arndís confesses.

For 36 years, she worked as an arts and crafts instructor at a service center for the elderly. She has held numerous exhibitions of her work.