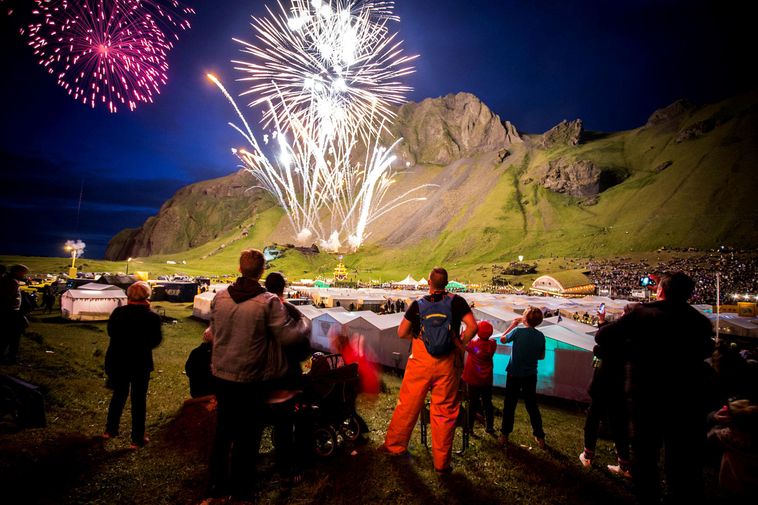 The festival in Vestmannaeyjar has traditionally been the largest music event of the year. Ófeigur Lýðsson
Ásgeir Ingvarsson
ai@mbl.is

According to the latest Covid-19 guidelines Icelanders are required to not gather in groups of more than 500 people. This means that many of the large summer festivals that usually take place in early August will have to be cancelled or altered in a considerable way. The 500 person limit will be in place through August but previously the limit had been set at 2.000.

In Iceland the first Monday of August is a national holiday and the three-day weekend celebrated as “Shopkeepers’ Weekend” (Verslunarmannahelgin). Icelanders would traditionally use this weekend for camping trips and to enjoy the many outdoor town- or music festivals on offer.

The biggest of these festivals is the “National festival” (Þjóðhátíð) that takes place on the volcanic island of Vestmannaeyjar and traces back to the year 1874. As many as 16.000-17.000 people would attend the multi-day event with revellers enjoying an extensive line-up of Iceland’s most popular musicians.

“It is true that [the festival weekend] won’t be like what we’re used to but during this pandemic Icelanders have shown that we can do things very well even when we have to do them differently,” said Prime Minister Katrín Jakobsdóttir in an interview with Mbl.is

Mr. Jónas Guðbjörn Jónsson, vice-chairman of the planning committee of the festival in Vestmannaeyjar says that by limiting gatherings to 500 people it becomes impossible for the event to take place. Locals had previously hoped to plan a smaller version of the festival limited to only the inhabitants of the island. Thousands of festival tickets had already been sold but are now being refunded.