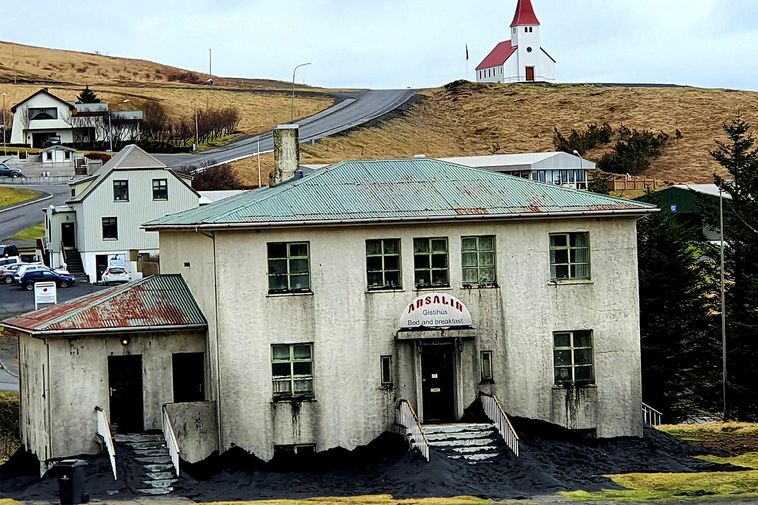 The former residence of the sheriff is already covered in ash. mbl.is/Jónas Erlendsson
Vala Hafstað
vala@mbl.is

The residents of Vík í Mýrdal welcome the prospect of volcanic ash over the coming weeks. The timing couldn’t be better.

The reason volcanic ash has begun falling is that preparations by RVK Studios are underway for the shooting of the sci-fi film series Katla, to be aired on Netflix next year. This is the first Icelandic Netflix original series.

The timing is perfect, since no tourists are expected any time soon in the town, normally crowded with tourists. Travel bans and the lack of tourists, caused by the COVID-19 pandemic, have been exceptionally tough for this area, which has seen unemployment rates as high as 42 percent this month.

The film series, directed by Baltasar Kormákur, takes place when the volcano Katla has erupted for nearly a year, causing havoc in the town.

In preparation for shooting, part of Vík will be covered in ash, looking deserted. Some ash has already been spread, as you can see in the photo above.

“All this activity had caused us some worry once we found out that shooting would be delayed,” states Þorbjörg Gísladóttir, director of the local council, “because we expected the town to be packed with tourists. But, as it turns out, the timing is perfect. My understanding is that the series will air in February of next year, and I trust it will be a great promotion for us.”

Rules regarding a ban on public gatherings will be eased somewhat on May 4, and on May 7, the crew is expected in town, where it will remain at least through the end of May.

RVK Studios has announced that it will emphasize hygiene and disease prevention and return the place in a good condition. Not surprisingly, the crew will be staying at Hótel Katla, and Þorbjörg hopes the guests will take advantage of services offered in town.

Film tax reimbursement in Iceland may go up to 25%