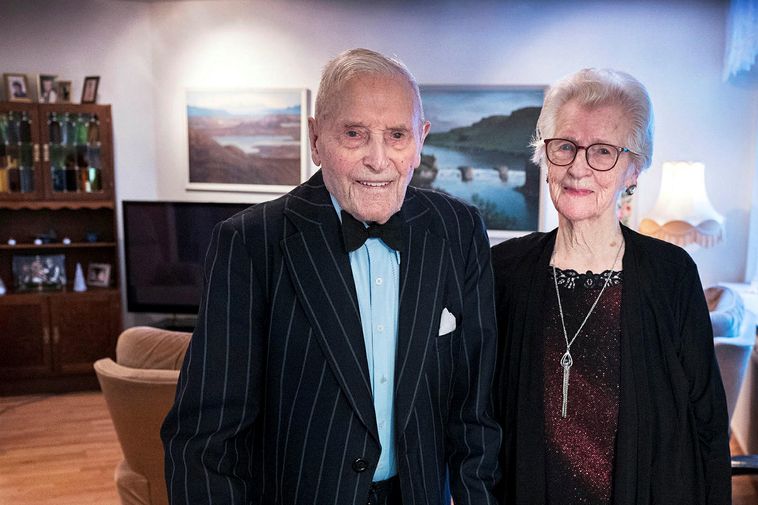 “Too bad I never learned to knit, because that’s the only thing I would have been able to do with such poor eyesight,” states Iceland’s oldest male, Lárus Sigfússon, who turned 105 on Wednesday.

His eyesight may be poor and his hearing may be getting worse, but his sense of humor is intact.
“I was 100 when I last went horseback riding,” Lárus states, “and that’s when I stopped driving as well, but I have the electric mobility scooter for going to the grocery store when the roads are clear.”

The birthday child has always been on the move. He was young when he started fishing in Hrútafjörður fjord, Northwest Iceland, in a rowboat. A the age of about 14, he rowed across the fjord, along with his sister, and then walked a long distance to Hvammstangi, to see their mother, who was in hospital, after which they returned home that night. As a teenager, he would ride long distances, often in inclement weather.

He stopped hunting birds when he started shooting foxes. “That’s when I realized how inhumane and undesirable, in every way, bird hunting is. Hunters are no better than foxes.”

Lárus used to be a farmer and has always been a supporter of the Progressive Party.

For 31 years, he worked as a minister’s chauffeur, in addition to being a cab driver. He was first hired by then Minister of Transport Halldór E. Sigurðsson, whose son told him he’d never seen a car as clean as Lárus’.

Lárus is the third oldest in a group of 14 siblings from the farm Stóra-Hvalsá in Hrútafjörður and the only surviving one. His sister Anna, born in 1918, died January 18. They used to be the country’s oldest living siblings. Lárus and his former wife, Kristín Hannesdóttir, had six children, four of whom are still living.

He and his partner, Kristín Gísladóttir, have lived together for about two decades. She turns 95 this year.

Lárus has slowed down and currently uses a walker or a cane. “My balance is so darn bad that Kristín has to hold my hand,” he admits. “I honestly don’t do a damn thing other than listen to audio books. It’s too fucking bad. Pardon my French.”

Lárus finds his longevity perfectly normal. “I’ve just been better than others at keeping myself alive. I’ve always said that a busy man doesn’t have  time to die.”