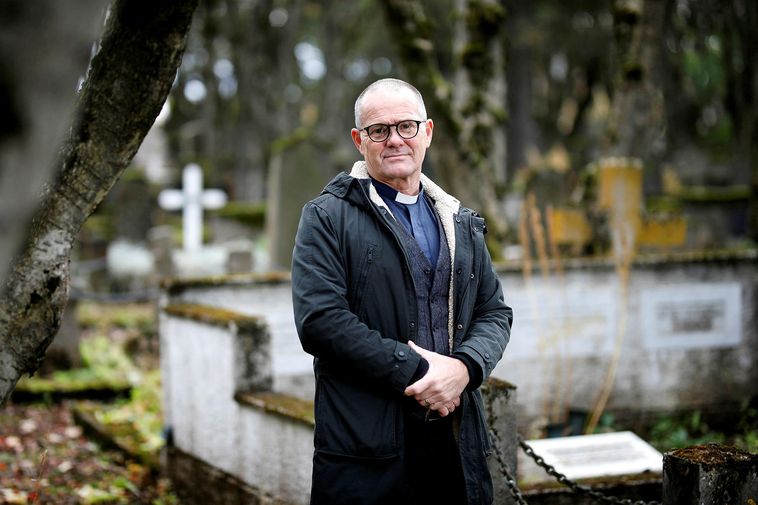 Fritz Már Jörgensson, Keflavík Church minister, has just published his fifth crime novel, the title of which translates The Body in the Graveyard (Líkið í kirkjugarðinum) – an unusual sort of writing for a minister.

“My current publisher at Ugla publishing house doesn’t believe there are many ministers writing crime fiction,” Fritz tells Morgunblaðið journalist Kristín Heiða Kristinsdóttir, “but I write crime novels, because I love such novels, and always have loved them.” Writing them is, above all, enjoyable, he states.

When I was young, I became acquainted with Nordic crime fiction by Per Wahlöö, Maj Sjöwall, and others. What I love about the Nordic crime fiction tradition is how much it encompasses – not just the crime itself, in which the suspense lies, but also the community, emotions and people of flesh and blood, with all their weaknesses.”

Fritz’ first book was published 12 years ago, and four others have followed. On top of those, Fritz has co-authored a cook book.

“Of course, my job [as a minister] has affected all my life and what I do, including writing,” Fritz confesses. “I see certain things in a new light. For example, I often see death - in all its forms - through my job as minister.”

Fritz was ordained minister rather late in life, or at the age of 54. “When I announced I wanted to become a minister, there were some who asked whether I was OK,” he states. “I became a minister, because it was my calling.”

In 1995, he was at a stage where he had to reevaluate his life. He sought treatment and followed AA’s 12-step approach. There, he states, a greater power is key, because as an addict, you need someone greater than yourself. “Little by little, I realized that my greater power was God,” Fritz reveals. He subsequently had a religious experience and ended up enrolling in religious studies at the university.

Now, he has earned a master’s degree in religion, in addition to a master’s degree in alcohol and addiction studies from the social work department of the University of Iceland. That, he states, helps him in his pastoral care. “First and foremost, people need someone who listens, whom they can tell about their problems,” he states.

He describes his job as minister as diverse and enjoyable. Right now, he alternates between writing his PhD thesis and working on his sixth novel. “To me, writing is the perfect recreation. That’s how I relax,” he explains.