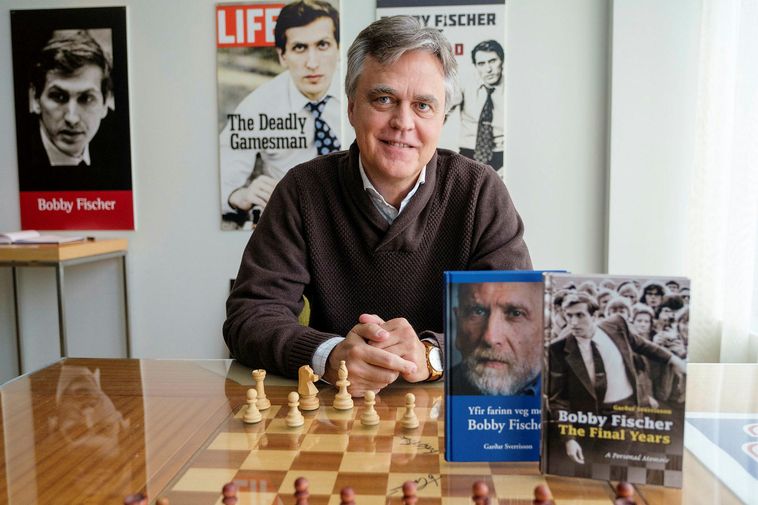 The book Bobby Fischer – The Final Years, by Garðar Sverrisson, has just been published by Ugla publishing house, Morgunblaðið reports. The English translation is by María Helga Guðmundsdóttir, but the original Icelandic version, Yfir farinn veg með Bobby Fischer, hit the shelves in 2015.

“I relate a number of things, not revealed elsewhere, regarding his life and attitudes, along with information on how he reacted to a difficult disease in the end,” Garðar states.

The former chess world champion died in 2008. He spent the last three years of his life in Iceland, where he is buried. Garðar and he were in touch almost daily for more than three years and remained close friends the whole time Fischer lived in Iceland.

“My family and I got to know him very well, unlike most people who have written about him and who have had to rely on sources of diverse quality, making many guesses where information is lacking,” Garðar explains.

He decided to write the book after being asked about Fischer numerous times by people who had heard all sorts of rumors about him.

“My family and I hardly knew the Bobby they were talking about,” Garðar continues, referring to the rumors. “That’s when I started jotting down all sorts of notes, which didn’t appear to have been revealed about his life and attitudes. Not just regarding chess and social issues, but also his numerous interests and dramatic life experiences, from growing up in New York to his last years in Iceland.”

Just like many others, Garðar admits he had expected Fischer to be difficult to get along with, but he turned out to be quite a gentle person. He enjoyed being around animals and chatting with young people. He spoke to them on their terms.

“It surprised me, too, how attracted he was to nature, having lived mainly in large cities,” Garðar states.
“He was interested in philosophy, very intelligent and well informed, having read so many books through the years and spent a long time abroad, mainly in central Europe and Asia.”

Garðar’s goal was to present the Bobby he knew and share points others would not be able to relate.

“I’m convinced Bobby would have enjoyed [the book],” he concludes, “although he might have argued about some details.”