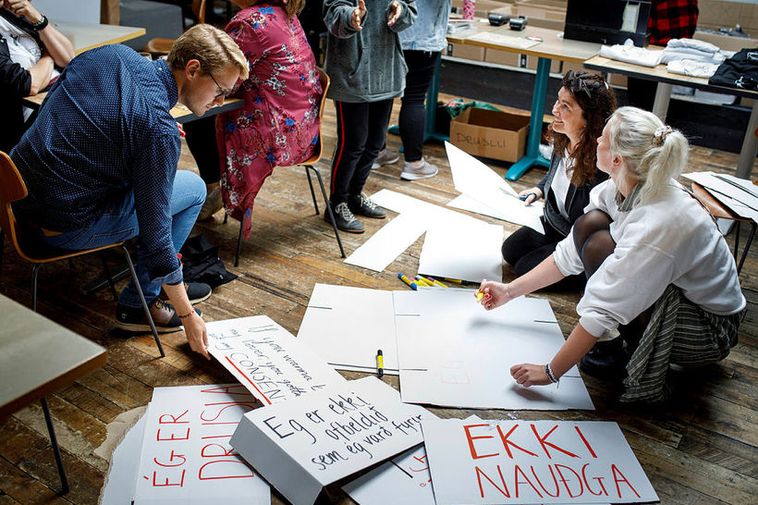 Preparations are underway for Reykjavík’s ninth  SlutWalk, scheduled for tomorrow, Saturday. The walk is to begin in front of Hallgrímskirkja church at 2 pm, from where it will proceed down Skólavörðustígur, ending on Austurvöllur square. There, speeches will be given, and musicians will perform.

“Craftivism is the use of craft as a moving force, or activism, to bring forth change in the world,  to improve the world,” Sigrún explains. She describes banner-making as a certain type of craftivism, intended to get people thinking.

The first Reykjavík SlutWalk took place on July 23, 2011, only a few months after the very first SlutWalk, which took place in Toronto, Canada, April 3.

The Toronto protest was organized after a Toronto police officer, advising a group of students at the city’s Osgoode Hall Law School on personal safety on January 24, 2011, remarked, “I've been told I'm not supposed to say this – however, women should avoid dressing like sluts in order not to be victimized.”

SlutWalk has since become an international movement, calling for an end to a culture in which it is considered acceptable to blame the victims of sexual assault.

“The main goal of the Slut[W]alk is to create a platform for solidarity with survivors of sexual violence and return the shame to where it belongs, with the perpetrator,” reads a post on the Reykjavík SlutWalk’s Facebook page. “The walk has grown every year since it was held first in 2011 and last year, almost 20,000 people walked with us.

The Slut[W]alk is ours. It is our weapon against injustice and violence. We will not accept a society that tolerates sexual violence by staying silent, whether we are survivors, family, friend, or otherwise acquainted with the Slut[W]alk.”

"They're not going to stop protesting until you resign"