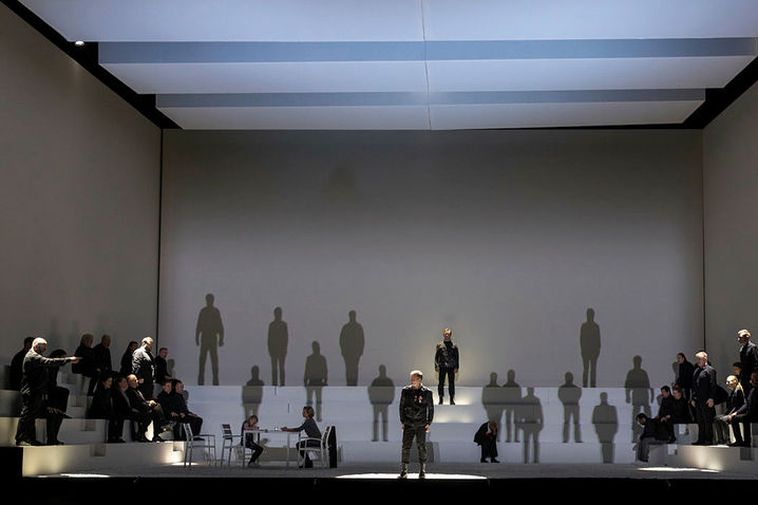 From the performance of Brothers in Budapest. Photo: The Icelandic Opera
Vala Hafstað
vala@mbl.is

The Armel Opera Festival in Budapest, Hungary, opened last night with Icelandic composer Daníel Bjarnason’s opera Brothers, performed by the Icelandic Opera and directed by Kasper Holten. According to Steinunn Birna Ragnarsdóttir, director of the Icelandic Opera, who was interviewed on RÚV rás 1 radio this morning, the performance was a success.

The opera was performed by the choir of the Icelandic Opera, Icelandic soloists, soloists from other countries and a Hungarian band. “The reaction of the audience clearly expressed their gratitude,” she stated. The performance took place in a 500-seat hall, which offered proximity to the performers, which Steinunn described as important. “There were many more in the audience, however,” she stated, because the performance was streamed on the website Arte.” The opera is in English. It is accessible here.

Brothers is Daníel’s first opera. Its world première was in August, 2017, in the Aarhus Concert Hall and was chosen the composition of the year at the Icelandic Music Awards last year. The opera also won Daníel the Danish Reumert Prize 2018, as the opera of the year, in addition to be nominated for the 2018 Nordic Council Music Prize.

The opera is based on the Danish film Brothers, by Susanne Bier, about two brothers, one of whom is sent to war in Afghanistan, where he becomes a prisoner of war. Profound moral questions emerge about life, crime and forgiveness.