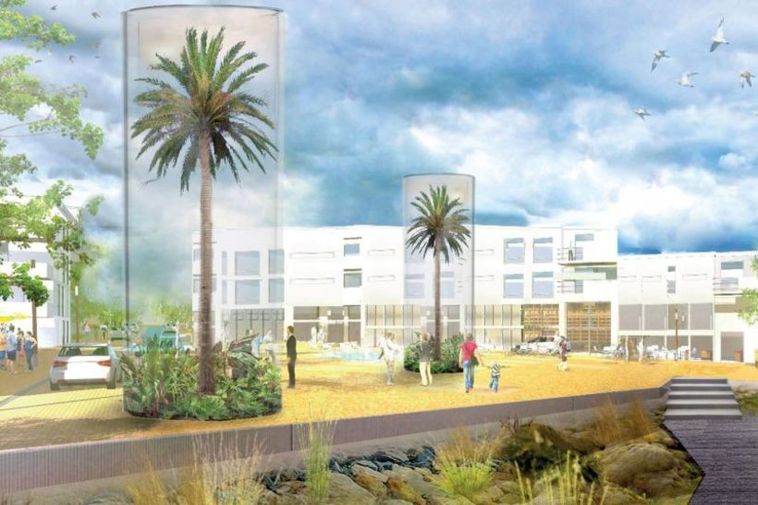 Pálmatré, or palm trees, a proposal by German artist Karin Sander won a contest for an outdoor artwork in Vogabyggð, a new apartment complex in Reykjavik. The piece involves two palm trees inside two tower-like glass greenhouses to create warmth and light, according to a press release by the City of Reykjavik.

The artwork will cost 140 million Icelandic kronas and the cost is shared by plot owners in Vogabyggð and the City of Reykjavik.  The contest was organised by the Reykjavik Art Museum.

This announcement hasn't gone down very well with the opposition in the City. Sanna Magdalena Mörtudóttir of the Socialist Party writes, "Okay, even though it's nice to look at palm trees it would be much more rewarding to observe secure housing. I think poorer citizens of Reykjavik would prefer to live in a warm, secure place rather than seeing expensive reminders of a southern, warm atmosphere. An atmosphere they will never experience because they can't afford to go on a beach holiday in the sun."

The jury verdict for the art installatation says that the proposal is unexpected, fun and daring and that the palm trees are a symbol of warmer, more exotic places who now can be rooted in a cold and barren land, just like people from foreign countries who now reside in Iceland."

The palm tree installation would be part of a new city square connected to bicycle and walking paths in this new area. A pedestrian bridge will connect the area to Elliðarósar where there will be a preschool and a primary school as well as a new park.

Karin Sander is born in Germany in 1957 and has received numerous awards and recognitions for her work which  has been exhibited worldwide, particularly in Europe and the United States.

Another artwork that received a special mention in the contest was a piece called Endless Lamppost. The jury proposes that the City of Reykjavik should invest in this artwork, which is the creation of Danish art group A Kassen. It's a 30 metre long lamppost and an ode to the work of Constantin Brancusi, Endless Column and therefore makes a reference to art history.

The land use plan for Vogabyggð stated that artwork should be a part of the overall design of the area.

Twitter in Iceland has been aflame with comments about the palm trees with some commenting that they would get the same amount of money spent on the palm trees after working 38 years in a preschool.