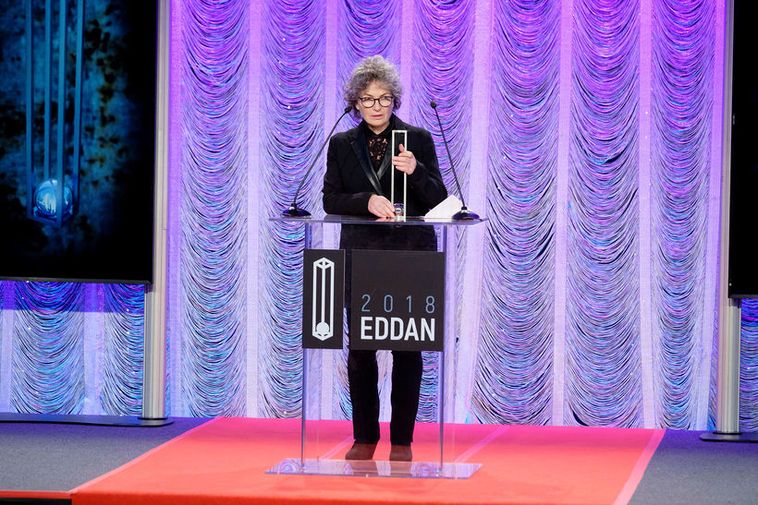 Valdís Óskarsdóttir receiving an Edda award for Fangar last year. Iceland Monitor/ Kristinn Magnússon
Renowned Icelandic filmmaker and editor Valdís Óskarsdóttir will be hosting a Wom@arts masterclass in Iceland at Rif in Snæfellsnes on Friday. The masterclass is part of the Northern Wave film festival programme which takes place next weekend.
The masterclass is moderated by  Nanna Frank Rasmussen, Chair of the Danish Film Critics Association, it's free of charge and begins at 6 pm.
Wom@arts highlights the equal share presence of women in the arts and creative industries in the European cultural heritage and diversity. Wom@arts Ambassadors are recognised as outstanding European artists from different fields of arts and culture. The Ambassadors have been invited to host a series of masterclasses in Europe.

Filmmaker Valdís Óskarsdóttir hosts a Wom@rts Masterclass in Iceland in collaboration with WIFT Nordic. Valdís will share her path as a filmmaker and talk about her career as an editor and prolific filmmaker. Valdís Óskarsdóttir was born in 1950 in Akureyri, Iceland. She graduated from the National Film School of Denmark in 1991, majoring in editing.

Valdís's otivation for her career as an editor: "Editing is not painting by numbers It's storytelling. Bubbling emotion and infinite inspiration. Editing is passion. You can get addicted to editing like drugs. And worst of all, editing can become your oxygen and no need to tell you what happens if you don't get that stuff. Just in case if you don't know. You'll die because you're not a fish."
The Wom@rts project & network Wom@rts aims to highlight the contribution of women to the European cultural heritage and diversity and to tackle gender inequality by supporting their presence in the industry from a cross-sectoral perspective, promoting a wide range of mobility actions, knowledge, tools, training activities and events.
Through Wom@rts, the Commission supports a very ambitious initiative, which plans to revert to some degree the very negative statistics in relation to the presence and recognition of female artists and cultural professionals.
Facebook
Twitter
Email
Reddit