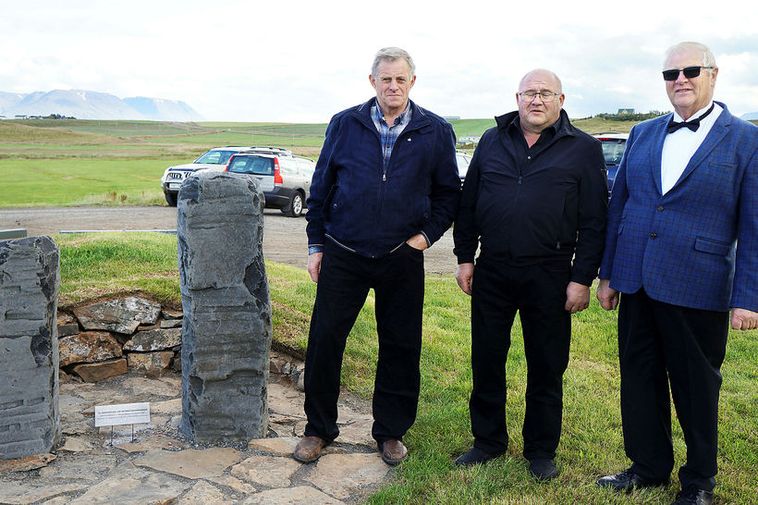 The present brothers from Reynistaður, from left, Steinn, Helgi and Jón Sigurðsson, standing beside the memorial. mbl.is/Björn Björnsson

A memorial for the legendary brothers from Reynistaður was unveiled in Skagafjörður, North Iceland, last weekend. Few people have been the subject of as many folk tales as the two brothers, because of the mystery surrounding their death.

At the beginning of Advent, the brothers began their journey back north, herding the sheep along Kjölur, in the company of two guides, despite warnings that they might not survive the trip.

On Kjölur, a violent storm hit, and the brothers and their guides, who had set up a tent, never made it home. All of them are believed to have died of exposure by Beinahóll (Bone Hill), along with most of the sheep and horses.

The brothers’ bodies were not found, only those of the guides. It was suggested that their bodies had been robbed of valuables, before being hidden. A sorcerer was consulted, who said the bodies were hidden in the lava field, under a slab. He, however, failed to find them.

Not until 1845 were the bodies finally found, in Kjalhraun lave field, under a slab, as the sorcerer had foreseen.

It was the present Reynistaður brothers, Steinn, Jón and Helgi Sigurðsson, who took the initiative to raise the memorial, along with signs that relate the tragedy at Beinahóll.

Jón Sigurðsson conducted the ceremony, which included the reading of a poem, dedicated to the tragedy at Kjölur.

Árni Bjarnason, the oldest living relative of the late Reynistaður bræður unveiled the memorial and commented that, “at last, the Reynistaður brothers have made it home.”