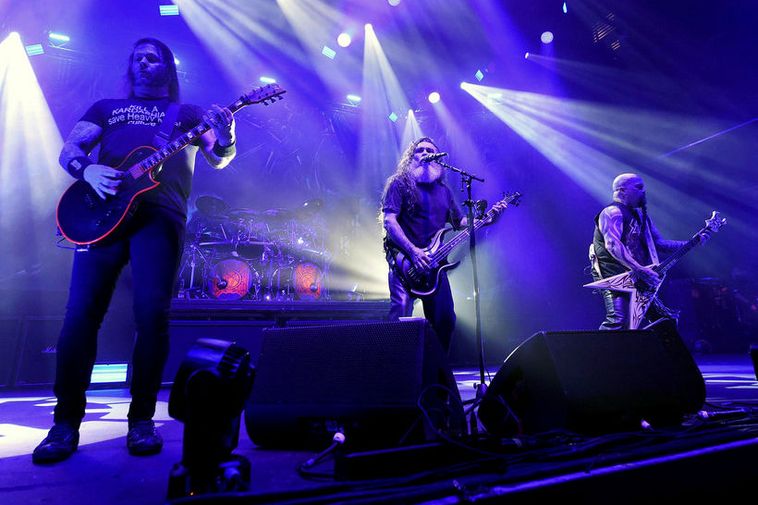 The Secret Solstice festival, which takes place in June in Laugardalur, Reykjavik, have confirmed heavy metal legends Slayer and rapper Gucci Maine as additions to a line-up that includes Bonnie Tyler.

The festival this year takes place between June 21st and June 24th.

In 1981 when Slayer first formed in Huntington Park, CA, bassist/vocalist Tom Araya was 20 years old and worked as a respiratory therapist, guitarist Jeff Hanneman, a rehearsal studio employee at the time, was 17, drummer Dave Lombardo was 16 and delivered pizza, and 17-year old Kerry King was a full-time guitarist. At that time, there were no blueprints, no set paths, no boundaries or steps to follow; Slayer’s new hybrid of metal and punk, heavier, faster and darker than the rest, assaulted the world and set a new standard, defining not only a genre, but an attitude. Fast forward nearly 37-years and Slayer remains the preeminent punk-thrash-metal band that other heavy acts are measured against and aspire to, and up-and-coming metal heads continue to revere and emulate. Slayer is a metal juggernaut, with songs that are dark, aggressive and without mercy, mirroring the turmoil and aberrations of our society. Their membership in “The Big Four” – Metallica, Slayer, Megadeth and Anthrax – the four bands that defined the thrash/metal genre – secures the band’s place in music history. The five-time nominated, two-time Grammy-winners have also accumulated an abundance of certified Gold albums along with “Best…” awards from media outlets all over the world, including Kerrang!, SPIN, Metal Hammer, Revolver, and Esquire. Slayer even has its own exhibit in the Smithsonian Institute.

In 2005, Gucci Mane debuted with Trap House, followed by his second and third albums, Hard to Kill and Trap-A-Thon in 2006. His fourth album, Back to the Trap House was released in 2007. In 2009, Gucci Mane released his sixth studio album, The State vs. Radric Davis, going on to become his first gold certified album. Following time spent in prison between 2014 and 2016, he re-emerged with several new retail projects, including Everybody Looking (2016), which were released to critical praise.

Gucci Mane has released dozens of mixtapes and has worked with artists such as Drake, Lil Wayne, Omarion, Mariah Carey and Young Thug. His 2016 collaboration with Rae Sremmurd, titled “Black Beatles”, provided Gucci Mane with his first number-one single on the US Billboard Hot 100chart.