Roald and his husband Sigurþór star in the ad. Screenshot/ Icelandair

A gay couple traveling around Iceland, taking in its nature and culture, are the protagonists of a new video advertisement from Icelandair. The company’s brand manager says it’s natural and important to show diversity, Gay Iceland reports.

“Icelandair’s customers are as diverse as they are many. We think it’s only natural to reflect that in our marketing material and therefore aim for a marketing approach that reaches certain groups and is suitable for certain media,” explains Jón Skafti Kristjánsson, brand manager at Icelandair. 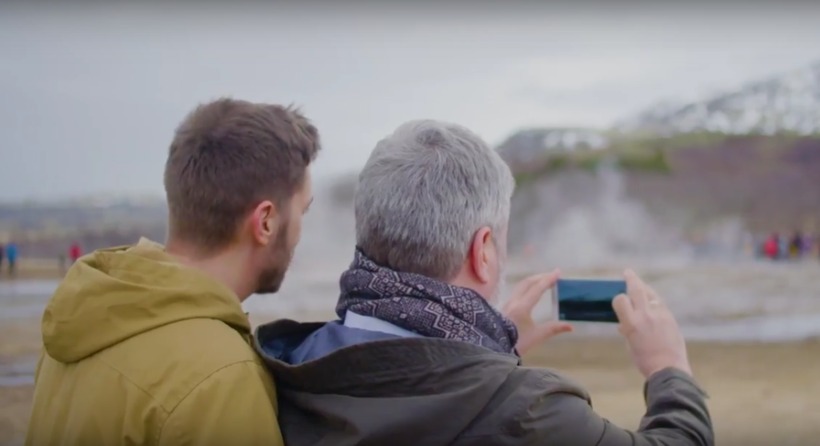 “This ad portrays a cultural trip to Iceland and the group it’s aimed at is people who travel to enjoy what life has to offer with their loved ones. So it was an obvious choice to use a loving middle-aged couple for such an ad; it’s worked well for us in the past. But this time we thought: why not add to the diversity and make this loving, middle-aged couple a same-sex couple?”

The ad is part of a series and will be shown on social media in all of Icelandair’s marketing areas abroad, promoting the experience of visiting Iceland. Jón Skafti points out that gay models have been used in the company’s advertisement before, but when promoting special package tours to Iceland or when publishing in specific media.

He says this ad is not aimed specifically at queer people. “We just think it’s natural and normal for advertisement to portray diversity. LGBTI+ people enjoy travelling just as much as others, of course. In fact, they might have a slightly higher frequency in traveling than other groups.”

Big companies and corporations are often criticized for jumping on the bandwagon when it comes to social issues, trying to appeal to marginalized groups to promote their business and make money. Jón Skafti dismisses this notion, pointing out that Icelandair has a long history of backing causes.

“We’re a company that has, through the years, been involved in our society. We’ve run a charity fund for long-term ill children since 2003 and been sponsors of sports, music, design and other cultural events. Most recently, we’ve made a clear statement regarding gender inequality in sports by airing a new TV ad for UEFA Women’s Euro . But I think we can also show social responsibility by challenging a little the stereotypes that are so often portrayed in advertisement. Businesses produce so much of the images that are being portrayed all around us and we know that they influence people’s opinions and self-image, so we have every intention of keeping reflecting our customers’ diversity in our marketing material.”

“We’re a company that has … run a charity fund for long-term ill children since 2003 and been sponsors of sports, music, design and other cultural events … I think we can also show social responsibility by challenging a little the stereotypes that are so often portrayed in advertisement.”

In return, media have often been criticized for flaunting Iceland as a queer haven but Jón Skafti says the aim is not to promote Iceland as a destination especially for LGBTI+ people.

“It’s not exactly our goal to cosset this image but here’s the reality of it: queer people tend to travel to Iceland because of the country’s reputation, and therefore often travel with Icelandair. Some of them are couples coming from countries where they can’t even hold hands in public and the acceptance that’s prominent here in Iceland is kind of liberating for people who are not used to that in their home countries. We’re simply portraying Icelandic society the way it is.”

The ad is part of a series and will be shown on social media in all of Icelandair’s marketing areas abroad.

And he stresses that the ad isn’t aimed specifically at the LGBTI+ community. “We just think it’s natural and normal for advertisement to portray diversity. LGBTI+ people enjoy travelling just as much as the next person, of course. To be honest, we didn’t intend to create an ad that would only appeal to gay people, although it is likely to raise special interest amongst them. The target group is simply middle aged people who are interested in foreign culture and enjoying life with their spouses. Queer people are obviously a portion of that target group. But of course, queer couples tend to feel freer to be themselves in Iceland compared to some other countries.”

What is perhaps most notable about this particular ad is that even though the characters in it are gay, they’re not the stereotypical, extravagant gay men so often portrayed in adverts: tanned, muscular young men dressed to the nines with stylized hair, dancing to Lady Gaga tunes till dawn.

“The target group for this particular ad isn’t young people wanting to party. It’s part of a series to promote a service we call Points and Money, where the individual ads are aimed at different target groups. The target groups we want to reach through this campaign reflect our existing customer group that are members of Icelandair Saga Club. With this particular ad we wanted to tell the story of a traveling couple who enjoy spending time together, exploring Icelandic nature and culture. We then have other ads in this series where we focus on other cities and different activities, such as seeing a show in the theatre, shopping trips, visiting museums and trying out new restaurants.”

The ads for Icelandair are made in collaboration with advertising agency Íslenska auglýsingastofan which hired complete amateurs to appear in the ad – men who are not even used to modelling – GayIceland’s chief editor himself, Roald Viðar Eyvindsson, and his husband and partner of 19 years, Sigurþór Gunnlaugsson.

And Jón Skafti says it adds an extra something to the ad. “We’re really happy with the outcome and especially the parts of Roald and Sigurþór, they absolutely fit the roles.  They did really well and I think the fact that they’re a couple in reality was a big factor. The profound love between them can be seen and it transmits onto the screen.”

He adds that during the process, he’s noticed much interest in the fact that Icelandair cast a gay couple in their ad. “It definitely reminds us of what a limited view of the world adverts tend to portray, and that we need to change that.”

See the ad here below: