10 facts about the Icelandic Yule Lads 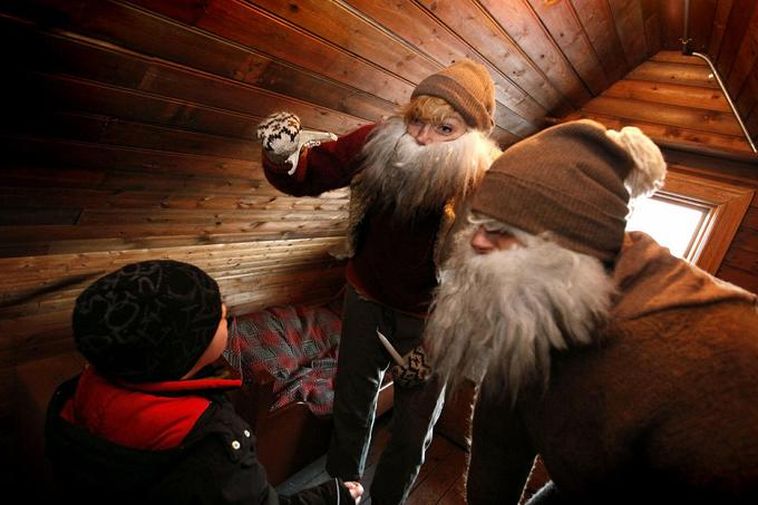 The Icelandic Yule Lads are 13 and only give gifts to well-behaved children. Photo: Iceland Monitor/Eggert Jóhannesson

Iceland does not have one Santa Claus – instead there are 13 Yule Lads, who seem to be some kind of half trolls. One might say they are the original bad Santas, they were menacing creatures who for years did not much else than play tricks on people and pillage. Sometimes they were accompanied by their mother and the Christmas Cat, who liked to eat children.

The story has it that they live in the mountains and only come out in December, when they sneak into children’s bedrooms the thirteen nights leading up to Christmas Eve and leave little presents in their shoes if they behave – or potatoes if they don’t. But they were not always this nice, far from it.

Poet Jóhannes úr Kötlum wrote a poem about the Yule Lads in 1932, this poem is still very popular and recited in many homes ans schools in December.

The first of them was Sheep-Cote Clod.
He came stiff as wood,
to prey upon the farmer's sheep
as far as he could.
He wished to suck the ewes,
but it was no accident
he couldn't; he had stiff knees
- not to convenient.

The second was Gully Gawk,
gray his head and mien.
He snuck into the cow barn
from his craggy ravine.
Hiding in the stalls,
he would steal the milk, while
the milkmaid gave the cowherd
a meaningful smile.

Stubby was the third called,
a stunted little man,
who watched for every chance
to whisk off a pan.
And scurrying away with it,
he scraped off the bits
that stuck to the bottom
and brims - his favorites.

The fourth was Spoon Licker;
like spindle he was thin.
He felt himself in clover
when the cook wasn't in.
Then stepping up, he grappled
the stirring spoon with glee,
holding it with both hands
for it was slippery.

Pot Scraper, the fifth one,
was a funny sort of chap.
When kids were given scrapings,
he'd come to the door and tap.
And they would rush to see
if there really was a guest.
Then he hurried to the pot
and had a scraping fest.

Bowl Licker, the sixth one,
was shockingly ill bred.
From underneath the bedsteads
he stuck his ugly head.
And when the bowls were left
to be licked by dog or cat,
he snatched them for himself
- he was sure good at that!

The seventh was Door Slammer,
a sorry, vulgar chap:
When people in the twilight
would take a little nap,
he was happy as a lark
with the havoc he could wreak,
slamming doors and hearing
the hinges on them squeak.

Skyr Gobbler, the eighth,
was an awful stupid bloke.
He lambasted the skyr tub
till the lid on it broke.
Then he stood there gobbling
- his greed was well known -
until, about to burst,
he would bleat, howl and groan.

The ninth was Sausage Swiper,
a shifty pilferer.
He climbed up to the rafters
and raided food from there.
Sitting on a crossbeam
in soot and in smoke,
he fed himself on sausage
fit for gentlefolk.

The tenth was Window Peeper,
a weird little twit,
who stepped up to the window
and stole a peek through it.
And whatever was inside
to which his eye was drawn,
he most likely attempted
to take later on.

Eleventh was Door Sniffer,
a doltish lad and gross.
He never got a cold, yet had
a huge, sensitive nose.
He caught the scent of lace bread
while leagues away still
and ran toward it weightless
as wind over dale and hill.

Meat Hook, the twelfth one,
his talent would display
as soon as he arrived
on Saint Thorlak's Day.
He snagged himself a morsel
of meet of any sort,
although his hook at times was
a tiny bit short.

The thirteenth was Candle Beggar
- ‘twas cold, I believe,
if he was not the last
of the lot on Christmas Eve.
He trailed after the little ones
who, like happy sprites,
ran about the farm with
their fine tallow lights.