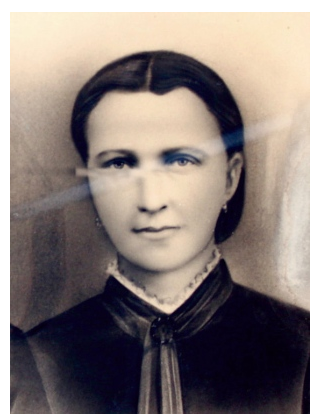 Friðrika Björnsdóttir died at the age of 35 and was buried in a field outside Riverton, Manitoba. Screenshot /CBC News

A lonely hill near Manitoba in Canada is the resting place of Icelander Friðrika Björnsdóttir. When she died, two weeks after giving birth to her eighth child, the cemetary was closed and she was therefore buried in a field near her family's home. She is reputed to be the grandchild of King Frederick VI of Denmark.

"She was long gone before I was brought into this world but her story has always circulated through my life," says Robbie Rousseau, president of Islendingadagurinn (The Icelandic Festival) in a story on the subject on CBC news in Canada. "I remember hearing stories of this possible royal family connection."

Filmmaker Angela Chalmers is currently making a documentary about Friðrika's family's long voyage to the Interlake region in Manitoba.

"It's a royal soap opera," Chalmers says. "King Frederick VI was trying to have a male heir. His wife kept giving him daughters so he looked outside his marriage, is the way of saying it I guess, and ended up having relations with a woman outside his marriage."

Following their encounters, a baby  named Samuel was born to the Icelandic mother and the Danish King. Samuel was raised secretely on the king's dime in Denmark,  but he was never formally recognized as the rightful descendent and heir to the throne allegedly due to his extramarital conception story, Chalmers says. He eventually made his way back to Iceland, where his wife gave birth to a daughter named Lovísa, who was Friðrika's mother.

Chalmers, along with family and friends, is raising money to provide her with a proper burial.