Travel website Stuck in Iceland kindly allowed us to share a guest blog by author Nancy Marie Brown who recently published a book presenting a new theory on the famed Lewis chessmen: That they were carved by a woman.

The Lewis chessmen are among the most popular exhibits in the British Museum in London and the National Museum of Scotland in Edinburgh. Norse netsuke, each one is individual, each full of quirks. Found on the Isle of Lewis in the early 1800s, these walrus-ivory figurines are the best-known Scottish archaeological treasure of all time. One expert calls them “the most famous and important chess pieces in history.” 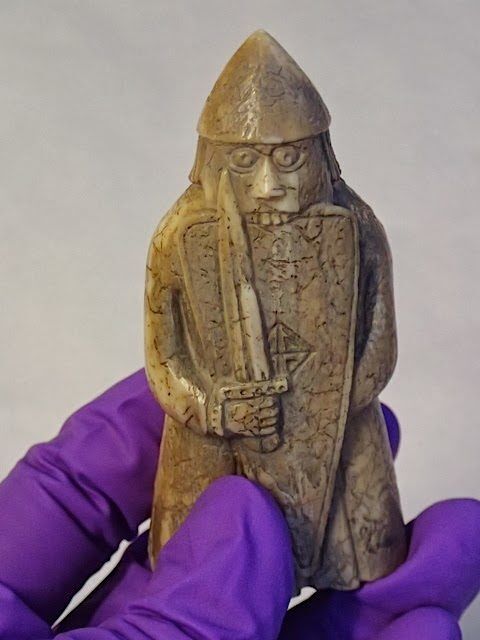 What do they have to do with Iceland?

If you’re traveling through southern Iceland, you can visit the place where they were made—maybe. In my book “Ivory Vikings: The Mystery of the Most Famous Chessmen in the World and the Woman Who Made Them,” I evaluate the theory that they were made for Bishop Pall of Skalholt in about the year 1200 by a woman artist named Margret the Adroit.

I conclude that it’s quite possible.

According to the Saga of Bishop Pall, the bishop was in the habit of sending expensive gifts to his friends in Norway, Denmark, Greenland, and the Orkney Islands. He surrounded himself with the finest artists in the land, four of whom are named in his saga: Amundi the Smith, Atli the Scribe, Thorstein the Shrine-Smith, and Margret the Adroit, who was the best ivory carver in Iceland.

Until recently, scholars thought the Lewis chessmen must have been carved in a town like Trondheim. Iceland was too poor and backwards to produce such sophisticated works of art.

They didn’t know about Bishop Páll and his artists.

Why not? The Saga of Bishop Páll has never been translated into English. Besides, many scholars consider the Icelandic sagas to be fiction. Some of the sagas are. The word “saga” comes from the Icelandic verb segja, “to say,” and it doesn’t imply either fact or fiction.

The Saga of Bishop Páll, however, is as factual as any medieval chronicle. It falls into the category of Contemporary Sagas. These sagas were composed within a generation of the actions they describe. Their authors were often eyewitnesses to the events. 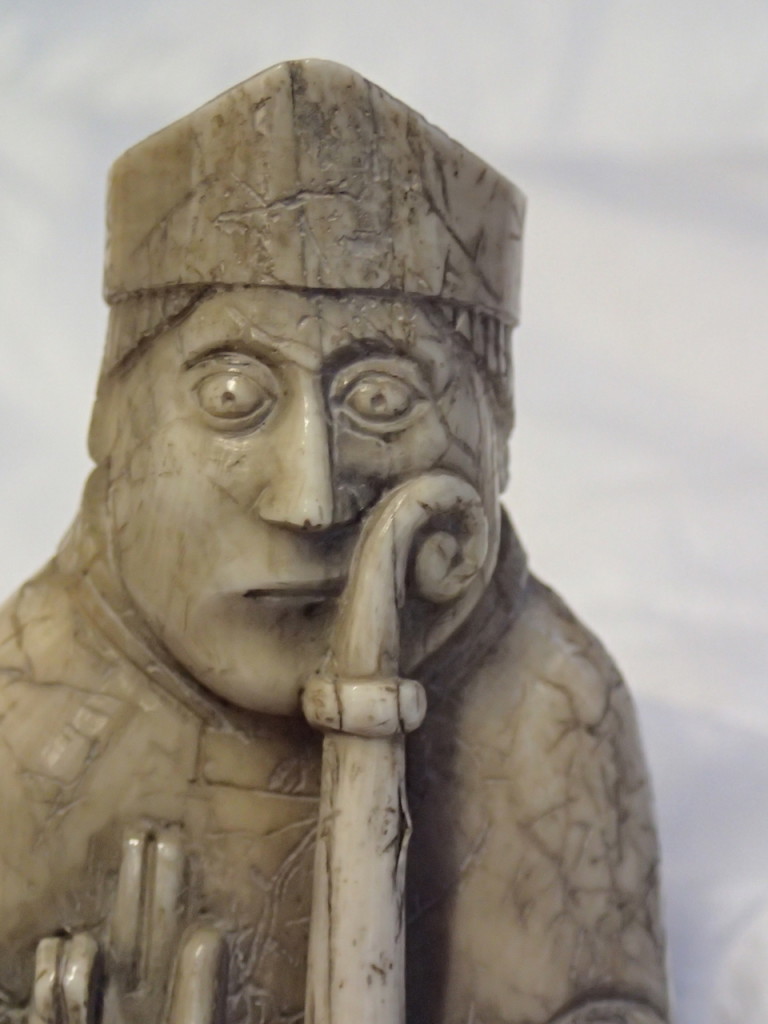 The Saga of Bishop Pall is also backed up by archaeology. According to the saga, Pall was buried in a stone sarcophagus. This sarcophagus is the only one mentioned in Icelandic records.

The country has no tradition of stone sculpture, and even Icelanders did not believe the saga account of Bishop Pall’s sarcophagus—until they found it. 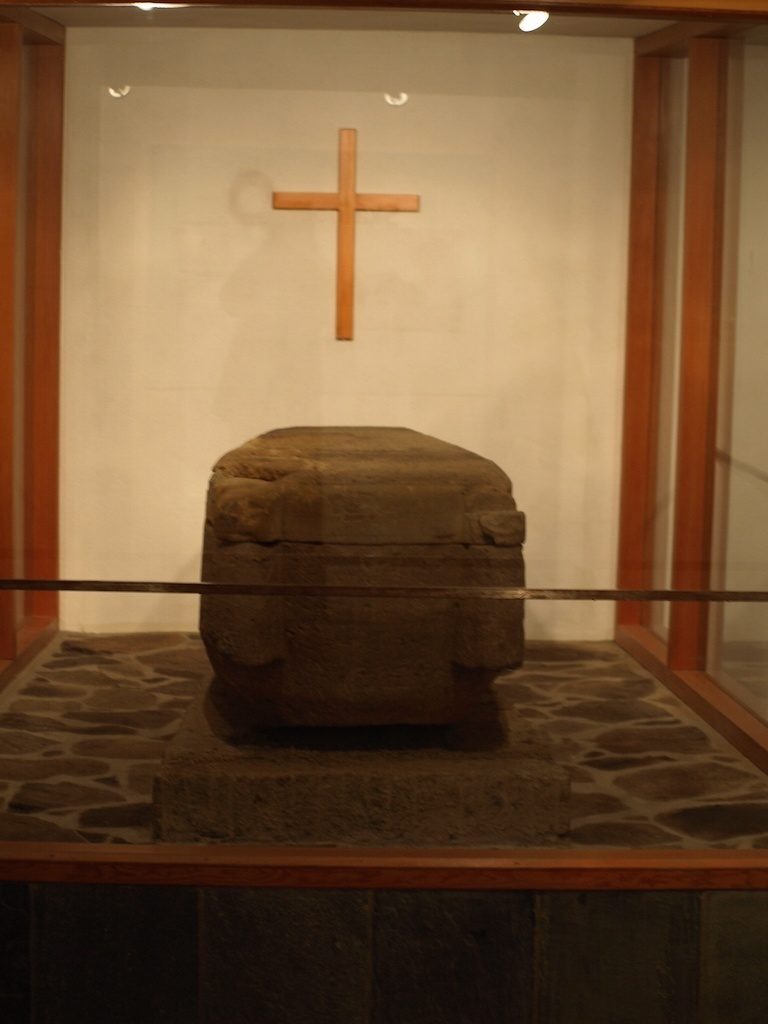 In the mid-1950s, before the new church was built at Skálholt, archaeologists were called in to excavate. They were uncovering the floorplan of the huge cross-shaped medieval basilica, the largest wooden church in Scandinavia at the time, when one of the workers struck stone. “Of all the things that came to light during the excavations at Skalholt,” said archaeologist Kristjan Eldjarn (who later became president of Iceland), “the grave of Pall Jonsson is the most important and meaningful. It is not certain that another such sign and wonder of the Icelandic sagas could ever be unearthed.”

You can now see the sarcophagus in the basement of Skálholt Cathedral. Carved out of one large stone, of the soft reddish volcanic tuff found on the hill across the river from Skálholt, it is simple and elegant, its rounded lines ornamented only by two cylindrical knobs projecting from the broader end. The lid has been cracked by fire, perhaps by an inferno in 1309 that destroyed the cathedral, but otherwise the coffin shows little damage.

When it was opened, the researchers found a bishop’s crozier carved from walrus ivory resting on the shoulder of the skeleton.

In 2012, any question that the skeleton was not that of Pall Jonsson was put to rest by radiocarbon analysis, which dated a bone sample to between 1165 and 1220.

Margret the Adroit would have remained a colorful detail in a little-read saga if the Icelanders had not decided to build that new, modern cathedral at Skálholt—and called first for an archaeological excavation. The existence of Pall’s sarcophagus vouches for the overall truth of the Saga of Bishop Pall. The ivory crozier found inside it calls to mind the one Margret carved out of walrus tusk, the saga says, “so skillfully that no one in Iceland had seen such artistry before.” 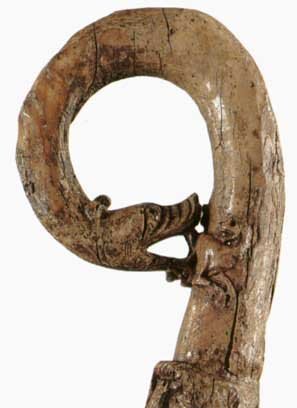 The crosier of Pall. Photo by the Icelandic Science Web – www.visindavefur.is

Bishop Pall’s crozier is now on display in the National Museum of Iceland in Reykjavik. We don’t know if Margret made it, but if the one she carved was comparable, she was clearly a talented artist. And the description of Bishop Páll in his saga proves that this lover of fine things had the means, the motivation, and the taste to commission the Lewis chessmen.