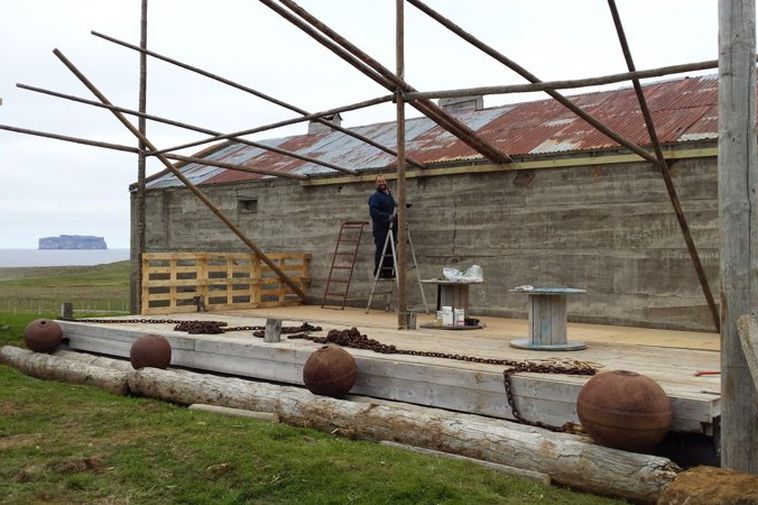 Iceland boasts a variety of music festivals. There are the big ones with many venues and bands, such as Iceland Airwaves and Secret Solstice, and then there are some smaller ones, that are happy to be small.

There is a new small festival starting this weekend. It is held in the north of Iceland just outside the small town of Sauðárkrókur. It is called Drangey Music Festival – Where the road ends. The tag line is literal – the road ends there, under Tindastóll Mountain, by the camp site, with nothing before you but the Atlantic Ocean, and Drangey Island, which the festival is named after.

What makes this festival unique according to Heiðar Ásgeirsson, one of the festival’s organisers, is the setting. There is nothing around the festival site, except spectacular views and beautiful nature that guests can enjoy in 24 hours of daylight, as the festival is held just after the summer solstice. There is a small camping space, just enough for the festival’s visitors, and a natural thermal pool. This is probably the only music festival setting in the world that has a natural pool.And it’s an old one, too – the Icelandic sagas tell of the outlaw Grettir who liked to bathe there after swimming from Drangey Island. It has been rebuilt since then, and is named after him: Grettislaug.

The festival offers only a limited number of tickets, in order to make sure that the connection between the artists and the audience is not lost. This creates a more intimate feel for the music and the festival itself.

The festival is held in connection with Lummudagar, a family festival of the whole area of Skagafjörður. Locals decorate their houses and make lummur (similar to American pancakes), and there is a market, games and all sorts of fun for young and old. Drangey Festival starts in the evening, as there is so much to do all over Skagfjörður on this day. But as the sunlight lasts through the night, this does not matter. The sun is up, so just forget about the time.

The line-up for this first Drangey Festival is looking great. The biggest name is the world-renowned Emilíana Torrini. Other performers are perhaps not so well known out in the big world, but are known to every Icelander – artists such as Jónas Sigurðsson, Úlfur úlfur, Magni, the local band Contalgen Funeral and more.

A great way to spend this weekend in Skagafjörður is to travel around throughout the day, check out everything that is going on, perhaps take a hike up a mountain or two, and then end the day at one of the most magical music festivals in Iceland!