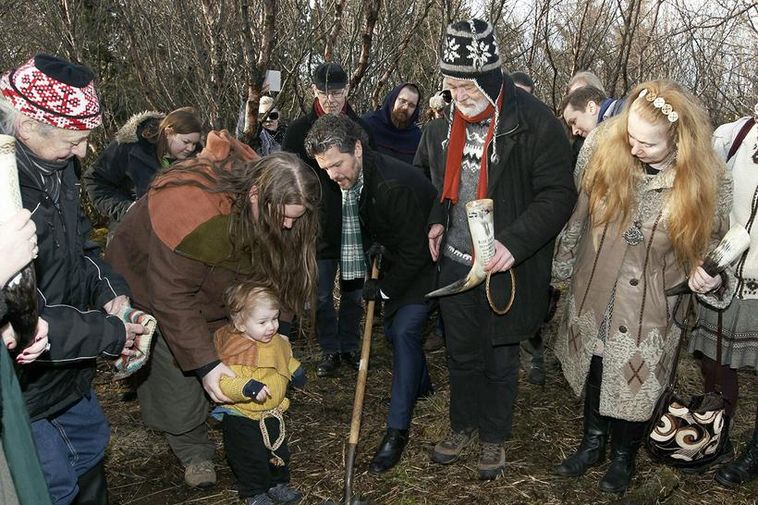 Members of the Ásatrú society conducted a special solar eclipse ceremony this morning combined with a groundbreaking ceremony for the Ásatrú temple set to rise next year. "A magical moment and I still have goosebumps," says high chieftain Hilmar Örn Hilmarsson

Ordered the weather from the gods

"The good weather is entirely due to us," explains Hilmarsson in a humorous tone. "We ordered the weather from the gods especially for this event." According to Hilmarsson, over 300 people came to Öskjuhlíð, a woodland covered hill in central Reykjavík, this morning to observe the eclipse. "Most of them wore solar eclipse glasses or other contraptions that I hadn't seen before. Some were using sooted glass and some used broken CD's for observing the eclipse."

Symbolic timing of the eclipse

The Ásatrú ceremony began at 08:38 when the solar eclipse began, symbolic rituals were performed such as the lighting of candles and sacrifices were made to the gods, of beer and water, Icelandic beer of course, insists Hilmarsson. "When the eclipse was at its peak a fire was lit in the place where the temple will rise and the victory of the sun and light was celebrated with poetry readings, song and music. Drums were beaten and trumpets sounded," explains Hilmarsson who adds that the Eddic poems contain beautiful solar references. "The timing of this eclipse is extremely important and laden with symbolic meaning. The sun and the moon in alignment entering the sign of Aries. It's an important new beginning and very important astrologically."

At the close of the solar eclipse ceremony, Mayor Dagur B.Eggertsson took to the shovel for the groundbreaking for the new temple and the gathering was sanctified by Hilmarsson. "It was a magical moment and I still have goosebumps," he says, adding that the event exceeded all his expectations.

A volcanic period for the next centuries

Sunshine and warm weather this weekend